Brazil stretches across almost half of South America, so it’s no surprise that there are many places in Brazil worth visiting. There’s something for everyone’s taste – from the milling crowds at Rio de Janeiro’s Carnival, to the fascinating modern architecture of Brazilia, over to the untouched nature of the Amazon rainforest.

And the beaches. So, so many beaches. If you’re planning a trip to Brazil, we have you covered. Here, you’ll find a list of the top tourist attractions in Brazil, some less known ones, and, finally, a few tips for how you can make the most out of your experience. So, let’s get to it.

One of the Most Popular Places in Brazil - Rio de Janeiro

You can’t talk about the best places in Brazil without starting with Rio de Janeiro. This city is so vibrant and full of life that this entire article could be about it. After all, an entire area of the city is designated as a World Heritage Site.

However, there are many other places worth visiting outside of Rio de Janeiro that we’d like to talk about so we did our best to cut it down as much as possible, but we strongly encourage you to explore for yourself. In any case, here are the top tourist attractions in lovely Rio.

When you visit Rio, you shouldn’t miss Cristo Redentor (Christ the Redeemer). Well, if it’s even possible to miss. This statute is almost 100 feet tall and its outstretched arms give it a width of 92 feet. It is situated at the peak of the Corcovado Mountain in the Tijuca National Park, just outside of Rio.

This giant was voted one of the New Seven Wonders of the World and has become a cultural icon of both Brazil and Rio de Janeiro. The 26 feet pedestal of the Cristo Redentor is also a popular wedding location. There are many ways to get to the monument, but we suggest going by train through the Tijuca National Park, as that in itself is a sight to behold.

If you’re looking for fun things to do in Brazil, go to the neighborhood of Copacabana. It is, of course, most famous for its white sand beach. So swimming, sunbathing, or surfing is a must. Also take a stroll along the beach so you don’t miss out on the two historical fortresses that mark the beginning and end of the beach – Fort Copacabana and Fort Duque de Caxias.

But don’t just spend your time at the Copacabana beach, as enticing as it may sound. Explore the Copacabana promenade, designed by world-famous architect Roberto Burle Marx. And if you’re visiting Brazil during New Year’s Eve, make sure you stick around for one of the most dazzling fireworks displays you will ever see.

Just next to Copacabana you’ll find the borough of Ipanema with its just-as-famous beach. Ipanema beach is a popular surfing spot, especially during winter. There are a plethora of social activities, from sports to dancing to just lounging around, so take a shot of cachaça and see where the road takes you. 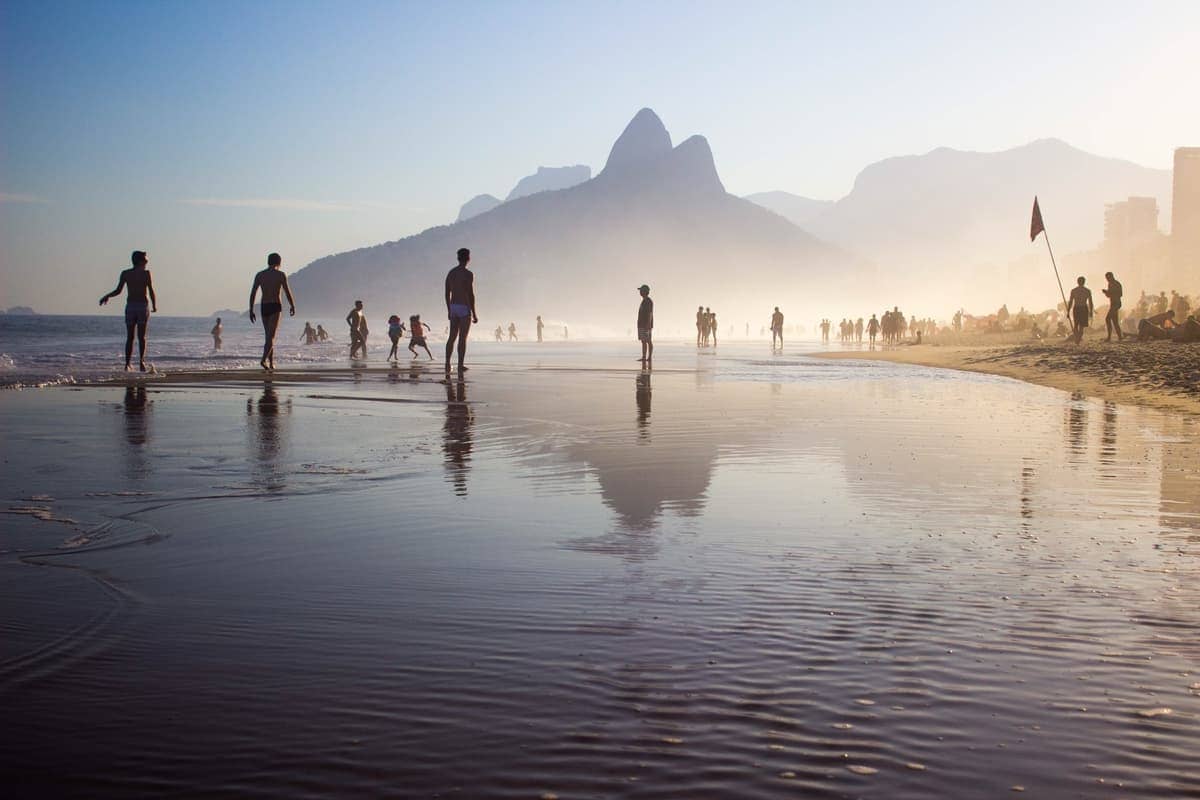 Carnival is celebrated in many places across Brazil, but the Carnival in Rio is probably the most popular one. Costumes, music, pageantry, shows – there’s nothing you won’t find here. Rio de Janeiro is without a doubt one of the best places to visit in Brazil, but this is especially true if plan to come to Rio during Carnival.

This year, Rio Carnival was scheduled to start on February 25, but it has been postponed to start on April 21. So you still have a chance to catch it!

Still remaining in the state of Rio de Janeiro, but moving away from the city itself we get to Paraty. While this much-smaller town is a popular tourist destination, it’s a good place to hide from the crowds you’ll encounter in Rio. This former Portuguese colony is one of the best-preserved colonial-era towns in Brazil, so it is definitely a must-visit for all history or architecture lovers.

Many colonial houses in the city center serve as a bed-and-breakfast, called pousadas by the locals. But Brazil being Brazil, you’ll not only find history in Paraty – you can take your pick from the many beaches if you want some time in the sun. On the other hand, you can take a hike through the Atlantic forest to explore the many waterfalls and freshwater pools.

Did we mention that Paraty is also a UNESCO World Heritage Site?

Moving on from Rio de Janeiro, we get to São Paulo state and the eponymous São Paulo city. It is the largest city in Brazil, so you could guess that there are many places worth visiting. Explore the many cafes and restaurants and enjoy the vibrant nightlife São Paulo provides.

But don’t miss out on the art scene, as that is what São Paulo is best known for. The Museum de Arte has the largest collection of art in South America and is well worth a visit, but there are many other museums and art galleries you should check out.

The São Paulo Art Biennial is a must-see for all lovers of fine art, as it is the second-oldest art biennial in the world. But, unfortunately, it was not held in 2020/2021 due to the pandemic and it has not been announced when the next one will be held.

Brasilia is one of the best places in Brazil to visit if you are looking for a change of pace. It is neither the oldest city in Brazil, nor the largest, but it is marvelous. The city was built from 1956 to 1960 on orders from Brazil’s then-president Juscelino Kubitschek.

The entire city can be considered one big, unified, architectural concept. And that is precisely what draws people to visit Brasilia – the architecture. Take a stroll around the Presidential Palace and Supreme Court, or visit the Itamaraty Palace whose gardens were designed by Roberto Burle Marx, the same person that designed the Copacabana promenade.

The list of architectural wonders in Brasilia is too expensive to list, so let’s just say that the entire city of Brasilia is a designated UNESCO World Heritage Site because of its architecture and unique urban planning.

8. One of the Most Beautiful Places in Brazil – Iguaçu Falls

Until now, much of the list has concentrated on urban places in Brazil. So let’s change the pace and talk about one of the natural wonders of Brazil - Iguaçu Falls. Iguaçu Falls are numerous waterfalls on the Iguazu River, on the border between Brazil and Argentina.

There are 247 waterfalls, the largest of which is the Devil’s Throat. Some waterfalls are on the Brazilian and some on the Argentinian side and you won’t be able to view them all from one viewpoint. However, the Brazilian side has many catwalks and even one tower, so you will be able to glimpse a good part of the grandeur that is the Iguaçu Falls.

9. The Beaches of Pernambuco

From one natural phenomenon to the next, we get to the beaches of the state of Pernambuco. There are some 116 miles of beaches, all of which are worth visiting. Porto de Galinhas is commonly named the best beach in Brazil, but, honestly, you can’t make a bad call regardless of which beach in Pernambuco you visit.

From going scuba diving to kayaking, you won’t be bored for a second if you come to one of the most beautiful places in Brazil.

10. What’s One of the Best Places to Visit in Brazil to Avoid Crowds? – the Amazon Rainforest

Finally, we get to the jewel of South America - the Amazon Rainforest. Entire chapters should be dedicated to the Amazon, so we won’t do it a disservice and try to fit it into a few paragraphs. It’s safe to say that this is a place in Brazil definitely worth visiting and you can find many guided tours and boat trips to take you into the jungle.

Here’s a Few Tips when Visiting Different Places in Brazil

The Brazilian real is the currency of Brazil and you generally can’t pay in dollars. Some shops may offer to exchange your money, but you often won’t get the best exchange rates. Similarly, most hotels and travel agencies will exchange money, but you’ll pay a steep rate. On the other hand, most ATMs accept Master and Visa cards, so that is also an option. But your best bet is to exchange money before your trip or in a bank and have real in cash on you.

Where Can You Exchange Real in the US?

You can exchange Brazilian real at US First Exchange and get the best rates. Buy Brazilian real online, pay by credit card, and have fresh banknotes delivered to your address within 24 – 48 hours of your order.