Colors in Japan: The Best Time to Visit Japan and Its Beautiful Scenery

Japan is globally famous for its incredible scenery. Anyone who has ever visited Japan would tell you that traveling through this mountainous country is like a sight for sore eyes. With that in mind, we compiled a comprehensive list of things to visit and the best time to visit Japan to catch a glimpse of the most vibrant colors known to man.

But let’s do a quick geography refresher first! Japan is an archipelago country, including almost 7000 islands. More than 260 Japanese islands are inhabited, but the majority of the population lives in the five main islands: Hokkaido, Honshu, Shikoku, Kyushu, and Okinawa.

Tourists spend most of their time on Honshu island, the largest and most popular Japanese island. Not only because there are many tourist attractions, such as Mount Fiji, but also because Honshu is the most connected with the rest of the world.

The best time to visit Japan would depend on what you want to see and what conditions you prefer. That is why we made this Japan in Color guide to help you pick where and when to go so that you can have fun in this colorful island country.

There is no ultimate answer when talking about the best time to visit Japan because this country is pretty large and the weather conditions are different. Moreover, each season offers unique and charming features and colors, making it even harder to decide.

Expect snowy winters almost everywhere in Japan and humid summers with hot temperatures in the middle of the islands. The coasts and smaller islands have a subtropical climate with warmer winters and hot summers.

There are a few weather facts to note, and the first one has to be that there is a strong typhoon season during August and September. Typhoons are manifested as heavy rains and strong winds. These storms are not often too dangerous, but there is a general caution among Japanese people, and the weather report could cancel many of your plans.

Another thing to note has to do with the view of Mount Fiji, one of the tallest peaks of an active volcano in the world. Many visitors try to pick the best time to visit Japan in the hopes of seeing the famous snow-covered mountain tip but often get disappointed because the fog and clouds cover it. The truth is that there is no guarantee you will see it whenever you go. However, you have the highest chances of experiencing the view if you go in the winter months.

Now to the best part - pick your season according to your favorite color! Things like that make Japan the most unique and mesmerizing country in the world. Each season has its perks, and vibrant colors follow you wherever you decide to go, so the best time to visit Japan will probably align with your favorite color and preferred temperature.

Winter brings soft blue and white colors to a Japanese season palette. Snow falls almost everywhere, or it is easily reachable because of the mountainous topography of the country. After the snowfall, the skies take on some of the most beautiful blue colors with pops of white clouds.

The best time to visit Japan for those who don’t like the crowds has to be winter. The cities are still hectic, but the tourist attractions are not clogged with people. There is enough room for nice pictures and time to take it all in.

Probably the only place where you will encounter crowds of people is on the skiing tracks. The skiing season starts in December and lasts until early March. Skiing resorts are near big cities, which have mild winter temperatures. The cold is avoidable and easily reachable simultaneously so that you can choose and adapt.

The three best places to visit in Japan during the winter months are Monkey Onsen in Nagano, Ginzan Onsen in Yamagata, and the small village of Shirakawago near Kanazawa on the east coast. Some other popular destinations in Japan from December to March are hot springs and mountain temples.

Visit Japan in the Spring: Pink and White

Many travel enthusiasts will say that the cherry blossom season is the best time to visit Japan. Pink and white flowers on the trees and in the grass signify spring in Japan. However, remember that cherry blossoms fall off about a week after they bloom - so check the conditions for the area you are visiting. Tokyo’s cherries bloom in late March and early April, while you can still catch them in late April if you visit Sapporo. 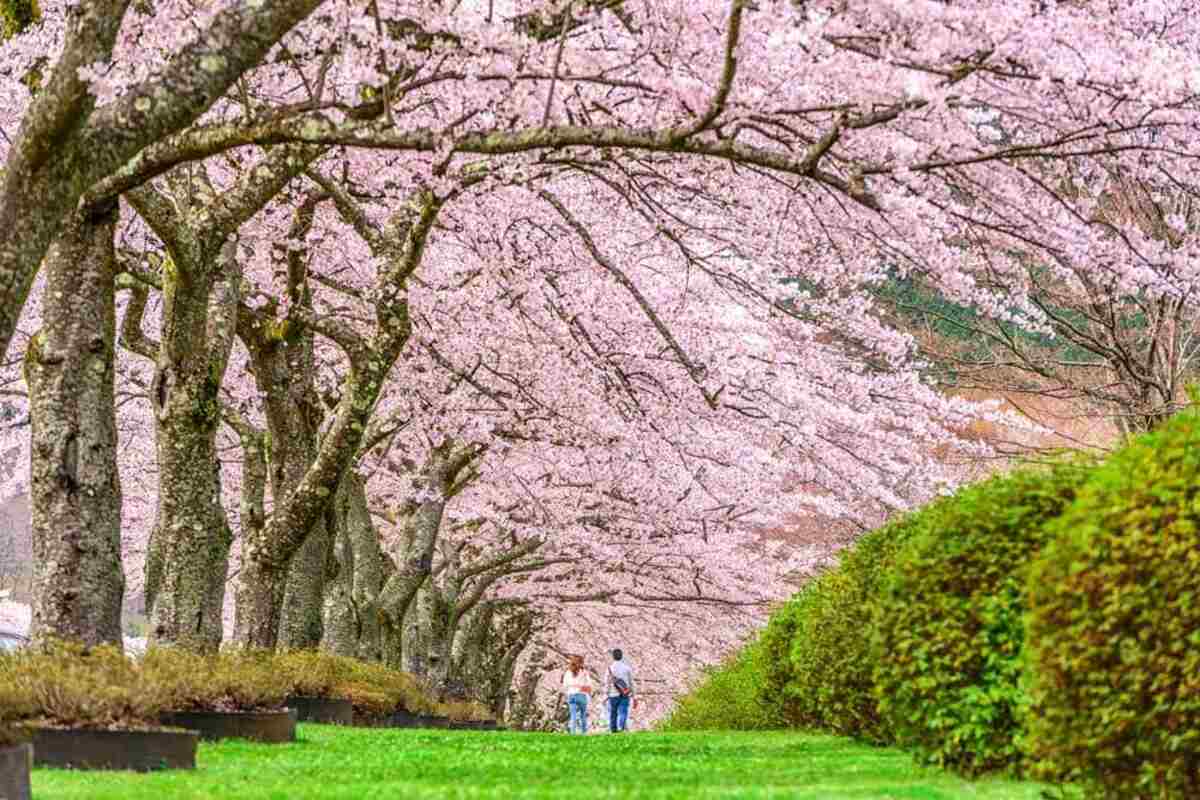 It is the perfect time to explore Japan’s natural beauty, hike in the mountains, and try fresh fruit from the local gardens. However, spring gets very crowdy, especially during Golden Week, so it is smart to avoid popular tourist attractions. The Golden Week lasts from April 29th to May 5th, and it is a series of national holidays celebrating different historical figures and customs from Japan’s rich culture. Since it is a national holiday, many Japanese have a week off, making the crowds even bigger.

Spring marks the beginning of the plum rain season, but the rains are not as heavy and frequent as the summer rainy season. If you want to avoid the crowds when traveling during the spring months, just travel to small villages and locally known attractions, or hide out in nature.

Visit Japan During the Summer: Purple and Green

Summers in Japan are overall the most colorful season, with vibrant colors of flowers blooming across the vast mountainous fields. Taking a hike outside the major cities will allow you to escape the humid and hot air. Moreover, it will give you a chance to explore this country’s green forests. Summer is not the best time to visit Japan for those who melt under the sun.

Japanese cities are crowded during the summer, so if you want to visit some museums and galleries in Tokyo, be prepared to stand in line. Consequently, everything will be more expensive, from flights to accommodation, even restaurants. Summer is really not the best time to visit major cities, but there are plenty of places to go where you can enjoy yourself, stay out of the heatwave, and avoid typhoons.

For example, visit the flower fields in Furano-Biei for the most fantastic view of lavenders. This purple heaven is located in central Hokkaido, the northernmost Japanese island and a place with mild summers.

Another colorful summer theme and the best time to visit Japan during summer must be the Nebuta Matsuri festival in Tohoku Region. This event celebrates Japanese folklore, with the famous float being carried and dancers in costumes performing in the streets.

Visit Japan in the Autumn: Red and Brown

When the late summer rains start to clear up, Japan is left with the world-famous leaf foliage that leaves visitors and locals breathless. September is still considered typhoon season, and the leaves start falling off at the end of October, so the best time to visit Japan for the red, brown, and orange colors is the end of November.

The best thing to do in Japan in the fall months is to hike the Kumano Kodo route. This trail takes its visitors for an unforgettable ride past picturesque views, such as villages, shrines, and forests. This trail is a must for everyone who is able and willing to hike because it is a journey that teaches about Japanese culture and nature at the same time.

Is There a Bad Time to Visit Japan?

For people who don’t stand the crowds and heat - the worst time to visit Japan is spring and summer. Some people don’t own that many winter outfits, so traveling during the winter months would mean buying all new things - those people should skip the months from December to March.

So, in our opinion, autumn is the best time to visit Japan as it has little to no negatives. The weather is dry and mild and there are plenty of festivals across the country. Autumn crowds are larger than those in winter but are still not as bad as the ones in spring and summer.

All in all, we think that visiting Japan is a blessing whenever your flight is taking off - beautiful snowy fields, cherry blossoms, flower fields, or autumn leaves on the ground - something will await you in this mesmerizing country.

Some Fun Facts About Japan

It is fun to know stuff about the country you are traveling to, so you can impress the locals or just expand your horizons. Make sure that you mention Kongo Gumi, the oldest operating company in the world. They have been in business since the 500s and they specialize in the construction of temples and shrines.

Japan is the land of vending machines - there is one vending machine for every 24 people. The best time to visit Japan for its most famous sport - sumo, is at the time of the Grand Tournament in May. And here’s a tidbit about local customs - Japanese people trade goods and services using the Japanese yen and drive on the left side.

Need to Buy Yen Before Your Trip?

Exchanging your country’s currency for the Japanese yen in an airport exchange office is what many travelers do when they arrive and consequently lose money because of bad exchange rates. If you plan your trip on time, US First Exchange can help you avoid those high airport fees. Just order the yens you need and we will deliver your package right to your address within 24 - 48 hours.