When is the Best Time to Visit South Africa This Year?

South Africa is the land where two oceans collide, with more than 470,000 square miles of space and over 60 million people. It is located in the southernmost part of Africa, has almost two thousand miles of coastline, and has a lot to offer to tourists who love nature. If you are wondering how to nail the best time to visit South Africa, this article is for you.

Nature and multiethnic culture are what you are in for if you decide to travel to South Africa. It is a megadiverse country, both with ethnicities of people and species of animals. There are eleven official languages and more than 15 national parks.

It’s safe to say, there are plenty of things to explore in South Africa and you have to start somewhere. The weather is different in different parts of the country, so we laid out key things to note when planning and packing for your trip to South Africa.

Seasons in South Africa Are Reversed

The South African climate is diverse - there are desert zones, high mountains, and subtropical parts. But, the one thing you need to know is that, since South Africa is below the Equator, their summer is Europe and the USA’s winter season and vice versa. So when is summer in South Africa? From December to March.

When finding the best time to visit South Africa keep in mind that the peak summer month is December, while July brings harsh winters to some parts. The shoulder season is the same as in Europe and North America and it covers April and May - South Africa’s autumn, as well as September and October - springtime.

South Africa also has a rainy season that lasts throughout summer but reaches its peak around February. The rains are usually welcomed, as the temperatures can get very high, and a quick shower of rain cools them off.

Weather in South Africa Throughout the Year

After we established that summer is in winter and vice versa, now is the right time to see what kind of weather you can expect each season. The best time to visit South Africa is in September because, wherever you decide to go, it is most likely nice weather and the prices are not as high as in April. Summertime is the best if you go west, but the east has the most favorable weather during the winter season.

If you like the summer crowds and Mediterranean climate, sandy beaches, and watching the sealine while sunbathing - you will love South Africa during summertime. The weather is especially nice around Garden Route because it is warm and dry and there is something about spending the Christmas holidays in tropical weather.

This is not the time for wildlife watching, because the temperatures can be unbearable, the grass high, and all the water dried out, so there is not much to see. This is the time for urban exploring, museum visits, and beach vacations.

The best time of year to visit South Africa, according to many, is March, April, and the beginning of May. That is why it can be impossible to find accommodation at the last minute, there are lines everywhere, and the safari trips are packed. But the weather is warm and dry, and the rainy season is slowly closing. The end of May is when it is starting to get cooler, but only during the nights.

Although it is considered to be shoulder season, the prices are still higher, and bargaining is almost impossible. March is also the best time to visit South Africa’s wine lands - many festivals around Cape Town are dedicated to harvesting grapes and winemaking.

If you are traveling on a budget and are looking forward to all the wildlife watching, you are going to love the winter season. If this is the case, the best month to visit South Africa for you would be August. June has cooler nights, but the days are still not as cold. July brings winter, but only some, rare parts of the country see snow.

If you are in search of some snow, the best time to visit South Africa and its Hogsback Mountains is in July. Most of the country is just dry and cool during the winter months, but the month of August brings wildflowers everywhere. It is mesmerizing to watch wildlife gather around a water source, surrounded by the colorful scenery created by the wildflowers.

Don’t forget that the whale migrations start in June and last until August, so don’t be surprised if you see whales on the horizon. It is a magnificent sight to witness.

Another shoulder season, and probably the best time to visit South Africa is from September until mid-November. Temperatures vary from 50 to 70 degrees, the rainy season hasn’t started yet, and the wildflowers have bloomed.

Places in South Africa and When to Visit Them

From the desert to the high mountains, beaches, and tropical forests, it can be hard to decide what to visit when you have just a few free days to travel. Here are some ideas for South African places and the best time to visit them.

The best time to visit South Africa’s most famous city is during the summer, preferably in March. Cape Town, or as some people call it Mother City is known as the root of liberation. There are many museums in and around the city, Hawequa Natural Reserve is just behind the coast, and it is surrounded by mesmerizing beaches.

Cape Town lies beneath Table Mountain, which is a haven for hikers; that is why March is the best month to visit South Africa. The weather is warm enough to be spending time in nature, without the heavy rain or cold breeze.

This country has more than fifteen national parks and even more nature reserves. It has one of the world’s biggest biodiversity, and the best time to visit South Africa for wildlife watching is from May to October. Ecotourists ranked this period as the best time to go to South Africa.

Numerous species can be seen in the natural reserves of South Africa. Animals like cheetahs, leopards, rhinos, and giraffes are just some of them. South Africa has many endemic species, such as the riverine rabbit.

Visit Kruger National Park during the winter months, because the vegetation thins out and is shorter, so you can spot wildlife easily. There is no rain and there is little to no risk of malaria. The only upside of visiting Kruger NP during the summer is that you can see a lot of baby animals with their parents.

Kruger national park is a must-visit if you are in the east part of the county - it is one of the biggest reserves in Africa. The land covers more than 7.5 thousand square miles of land and around 150 species of mammals.

An hour away from Cape Town and on the coast of the Atlantic ocean lies West Coast National Park, with plenty of activities for outdoor lovers. This is a true floral kingdom, as there are thousands of species of plants, and the best place for bird and whale watching in South Africa. The best time to visit South Africa and this beautiful national park is in August for the full migration experience.

What is also special about the West Coast National Parks is that it borders the coastline, so now and then you can find a beautiful, natural beach. Watersports enthusiasts can enjoy sailing, parasailing, kite surfing, and much more.

There are a few things in the world quite like Addo Elephant National Park, located a few hours drive from Gqeberha. Although the name is dedicated to elephants, don’t be surprised if you see lions, monkeys, hyenas, wildcats, leopards, and many more animals in Addo Park. 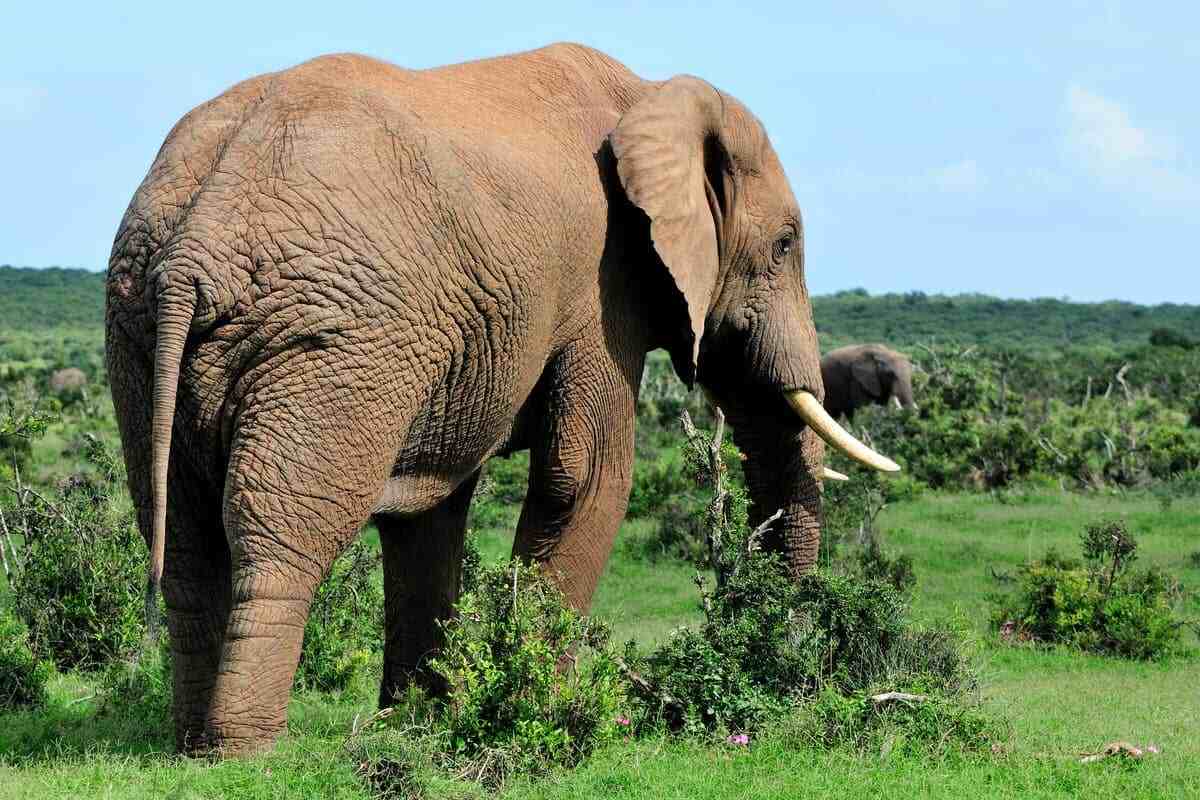 The best time to visit South Africa if you plan to visit this national park is during the dry and cold period, so in July or August. Some parts of the reserve are sandy deserts, and some are tropical with vegetation. This unique park will connect you with nature and give you the opportunity to watch wildlife in their natural habitat.

The best time to visit South Africa and its coastline is from November to December before the Christmas crowds start coming. Of course, the beaches are beautiful all year round, and you can enjoy them the whole summer, but you can avoid the crowds, especially if you like water sports activities.

Bloubergstrand is just one of the many beaches near Cape Town and it is famous for its view of Table Mountain. This is where you want to be during those South African summer months. If you are staying on the coast of the Indian Ocean, visit Sodwana Bay for the dunes covered with tropical forest. The best time to visit South Africa’s Indian Ocean coast is actually the whole year round because it is sunny and hot almost every month.

As stated before, South Africa is a diverse country and so it seems logical that there are plenty of events and festivals to be visited. Many of them celebrate the harvesting season, or they showcase many traditional dances and costumes.

Cape Town Carnival, Dance Umbrella in Johannesburg, and Hermanus Whale Festival are just a few of the most popular events near the capital cities. For many young adults, the best time to visit South Africa has to be during the Splashy Fen Music Festival in April. This occurs every year in Underberg and has many popular musical artists on the stage.

If you decided to explore the county as a whole, the best time to visit South Africa would probably be from September to September. You have to experience each season and have the time to speak to the locals, to understand them and their culture.

Exploring the vast natural wonders of South Africa will take a lot of time, but you will enjoy them and learn something new about the world and yourself. The best time to visit South Africa is as soon as possible.

When you plan your trip, don’t forget to exchange your county’s currency for the South African Rand. The safest way to do it is by buying it from US First Exchange before your departure - that way you can avoid those high rates in local exchange offices, and you would not need your plastic card. South Africa is not credit card-friendly outside the urban areas.