The price of the world’s most well-known cryptocurrency has been rapidly dropping since the previous weekend began and continued to drop on Monday, May 9. Compared to the high of November 2021 when it was almost $69,000, the price of BTC has more than halved and there are predictions that it could drop as low as $31,500.

Given that the current price of below $32,000 is already the lowest that BTC has been since July of 2021, there is understandable anxiety in the crypto market. Just during the previous week, the price of BTC has gone down by approximately 15%. 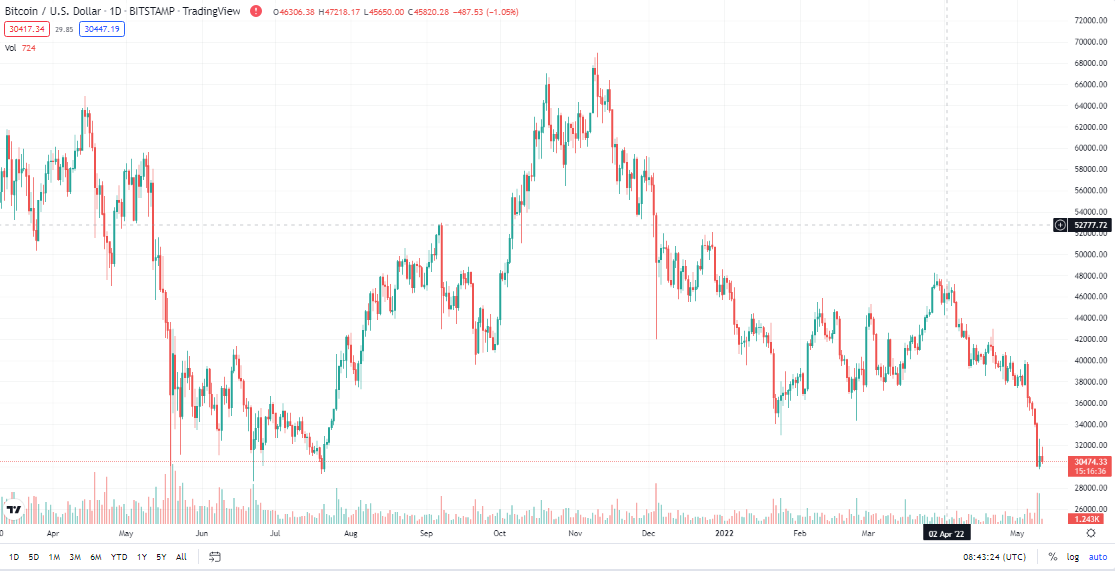 And other big cryptocurrencies have followed suit – Ethereum, Solana, and Cardano, among others, have experienced a similar drop to Bitcoin in the past week. One of the reasons for the drop is that cryptocurrencies are considered high-risk assets and major investors avoid investing in crypto during times of economic uncertainty.

“Cryptocurrencies are increasingly moving in sync with tech stocks with investors treating both as risk assets and often retreating to safer corners of the market during bouts of market volatility,” Michael Kamerman, CEO of Skilling trading platform has stated per CNN, although he added that he still believes in Bitcoin in the long term.

Fear of high inflation, interest rate hikes by the Federal Reserve, and a bursting of the pandemic crypto bubble all contribute to the uncertainty of cryptocurrencies. High interest rates traditionally lead to higher dollar values, which are considered bad news for crypto, as a weaker dollar is usually a sign for bullish crypto.

The drop in the price of Bitcoin and other digital assets was predicted last week by some analysts, similarly citing the high-risk nature of crypto and a weakening economy. “Professional money managers aren't loading up on high-risk growth assets currently,” Kurt Grumelart, trader at Zerocap stated last week via Telegram.

The short-term future isn’t looking bright for Bitcoin and other cryptocurrencies, at least according to many mainstream experts. Edul Patel, CEO of Mudrex, stated that “The downward trend is likely to continue for the next few days,” while adding that BTC could go as low as $30,000.

Some predictions for crypto in 2022 are even bleaker – Jay Hatfield, CEO and portfolio manager at InfraCap Infrastructure Capital Advisors has stated that Bitcoin could go as low as $20,000 by the end of the year.

That being said, cryptocurrencies are by their nature volatile. Just as many predictions from experts end up being wrong as end up being true. An unexpected bullish run from Bitcoin or other crypto is never off the table and we will keep you informed as the situation progresses.

A Comprehensive Guide to Currency Appreciation & Depreciation May 20th, 2022
Everything You Need to Know About the Iraqi Dinar May 20th, 2022
Lessons in Macroeconomics: Why Might a Country Choose to Devalue Its Currency? May 18th, 2022