Counterfeit Recognition: How to Tell if Money Is Fake

Counterfeiting money is a crime, there is no doubt about it. And, like any other crime, it is present in our society. It's not only the police's or National Bank's job to look after the validity of banknotes; it is our duty as well. That's why we deem it highly important to know how to tell if money is fake.

In order to avoid being victims of counterfeiting money, we could use some knowledge and tricks to tell us if the money is fake. We don't have to be professionals, but we all know how money banknotes look.

How Does Counterfeit Work?

Each paper note has a denomination, text, watermarks, inks, and other details. US banknotes are made from note paper - a blend of cotton and linen. Based on those characteristics, there are several ways to tell if a bill is genuine or counterfeit.

Fake bills can be done with a lot of precision, but there are always ways to check. Your gut sending you red flag alerts is a reason enough to do a quick test of the bill.

People who work retail usually have this feeling and know how to tell if money is fake. They present a huge and essential dam against counterfeiting.

Fake bills show up in different denominations, and unfortunately for businesses, it often goes unchecked. Money laundering is a process of bleaching authentic bills with smaller denominations and printing them to look like $50 or $100 notes.

However, the counterfeiters figured out that the suspicion a retailer might have towards a $100 bill disappears when a smaller note is in question. US officials seized around $1 million in fake one-dollar bills in 2019.

Since there is no way to stop the attempts of creating fake bills, we - the workers, citizens, and business owners - need to be on the lookout for these forgeries.

Crime amateurs won't fall for this one, but if we want to rule out forgery, we have to check if the bill denomination on the bottom right-hand corner has color-shifting ink. Every produced bill since 1996 has this trademark.

To check if what you have is a counterfeit currency, tilt it from side to side and look at the number in the upper right corner. The color of the number should change as you shift the bill.

Watermark is embedded in the paper to the right of the portrait. You can see it from both sides of the bill, but testing the authenticity will require holding the bill against some source of light. Also, if the watermark is a face, it should match the portrait of the bill. 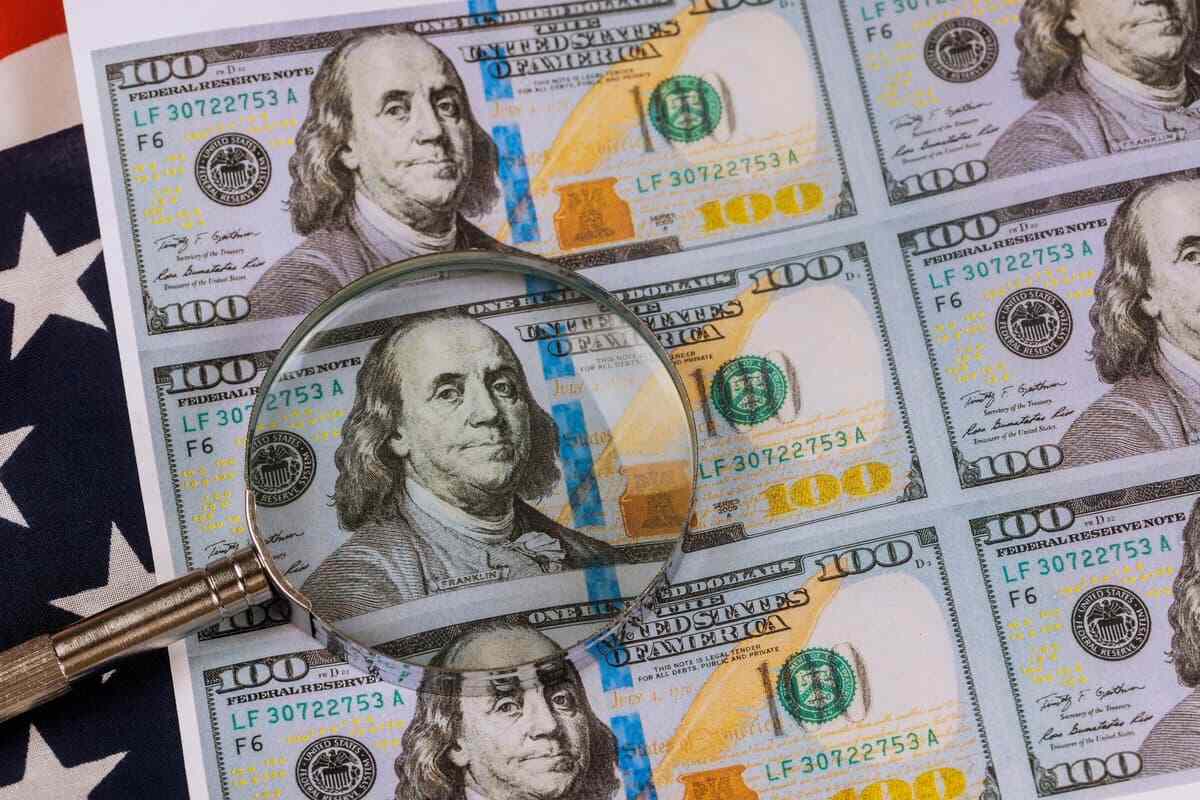 It is not unusual for counterfeits to bleach bills with smaller denominations and reprint them with higher values. They are easily exposed upon authentication because, in that case, the face doesn't match the watermark.

If there aren't any watermarks - that's an easy indicator that the money is fake. Similarly, if you can see a watermark without the light source, that is proof of counterfeit.

Any Kind of Blurryness is a Red Flag

It is as simple as this: if you notice blurry borders, printing, or text, you are looking at signs of dealing with fake money. Authentic bills are highly detailed, with precise lines, dots, and negative space. There is nothing blurry on an original banknote.

When it comes to this item of a counterfeit check, the first thing you are going to check is note borders. All you need is a magnifying glass and a good sight. Microprinting on the note borders must be readable using this tool. If you can not read it - it's a fake!

Not everything is tested by sight. If you want to know how to tell if money is fake, you need to open your senses. Use your sense of touch and figure out whether you're holding the real or the fake one.

When you run your fingernail down the note, you should feel some vibrations on the nail from the ridges of the raised printing. This is the result of the uniqueness of the paper and the intaglio printing process. The lack of vibrations should ring a bell, and you should further inspect the bill.

The security thread consists of a thin ribbon threaded through the note's paper. The material of the thread can be made out of plastic or metal foil, and the thread itself can contain engraved text or numbers.

Like a watermark, once you hold up the banknote to the light, the strip should appear in the form of a solid line. Each line has USA and the denomination number printed in letters. For example, the $5 bill will have USA FIVE.

Not every USD note has a security strip in the same area. For example, you can find it to the right of the portrait on the $10 and $50 bills. In contrast, the thread is located on the left of the portrait of the $5, $20, and $100 bills.

Ultraviolet flashes are accessible, you can easily buy them and many businesses provide them for their floor workers. The ultraviolet glow is a great tool for telling if money is fake.

Real money will not glow under ultraviolet light, rather only the security threads will. The one-dollar banknote is unique, as it has no thread and thus has no glow.

What to Do in Case of Counterfeit Recognition?

There are probably thousands of counterfeit bills in circulation right now, and many retail workers are, unfortunately, held accountable for this misfortune. Knowing how to tell if money is fake is not only a matter of national economic security, it is about safeguarding businesses and jobs of the people who work at the counters.

If you spot counterfeit bills, don’t put yourself in danger. Don’t check the bills in front of the person that gave them to you, don’t yell at them, and don’t try to catch them yourself. Observe a person who gave you the counterfeit notes - everything from facial features to a license plate number, but from a safe distance. After you’ve acquired information about the potential fraudster, hold on to the note and check the abovementioned items.

After you’ve established that your suspicions are reasonable, contact the authorities. Treasury suggests contacting the local US Secret Service office along with local police.

How to Tell if Foreign Money is Fake?

Money laundering and counterfeiting are happening all over the world. We covered the checkable items for the US dollar, but you can stumble upon a fake note while you are overseas on a holiday. How to check and whom to get in touch with?

Many currencies use similar security measures, such as serial numbers, raised ink, and microprinting. Make sure you remember when and where you got the bill and contact the local police.

To avoid these kinds of uncomfortable and dangerous situations, we recommend contacting US First Exchange before you travel. We offer a large number of currencies at a fair rate, and we deliver them to your doorstep in no time.