Intro to the Afghan Afghani

Are you interested in exploring more currency options? Have recent headlines piqued your interest in Afghanistan? Perhaps you’ve heard of the Afghan Afghani, but your sole understanding of Afghanistan is the US conflict or the Taliban. This article will give you a better feel for the country of Afghanistan and how that history has shaped currency development in the country.

History of the Country

Modern Afghanistan is located in Asia bordered on the west by Iran and on the east by Pakistan. Several countries that were formerly Soviet Republics border the north: Turkmenistan, Uzbekistan, and Tajikistan. The earliest archaeological records we have about civilization in Afghanistan is between 3000 and 2000 BC. The first historical documents come from the Iranian Achaemenid Dynasty which controlled the area from 700 BC to 330 BC.

Many of the great ancient empires settled and controlled the area such as the Persians under Darius the Great and the Greeks under Alexander the Great. In fact many of the modern towns in Afghanistan are built upon Greek foundations.

A Buddhist civilization flourished in the region from the late 1st Century AD through the end of the 10th century. Arab raiders into Kandahar brought Islam into the country around 700 AD. At this time, the Turkish empire began to grow in power in Iran making inroads into the country. The Mongolian Khans invaded in the 13th century. After the Mongol departure from the country, Afghanistan was fought over by various Indian and Persian empires.

In the 18th century, a group of Pashtun tribes under the leader Durrani defeated the remaining Mongols and Persians, consolidating many of the native tribes into their own empire.

It was during the 19th century that Afghanistan came under Western influence through a power struggle between Russia and England. British expansionism was brought to a halt in Afghanistan in the first Anglo-Afghan war between 1839-1842. Britain tried again between 1878-1880 and asserted some permanent control over the territory. Britain’s main impetus for control in the region was to protect it’s colony in India as well as to prevent Russia from exerting influence in the area. Britain sold weapons to the local rulers. The Afghani ruler Abdur Rahman Khan raised an army and defined the border of Afghanistan with British India (now Pakistan).

On August 19, 1919, Afghanistan gained full independence from Britain following the third Anglo-Afghani war. Afghanistan began entry into the modern world after independence. From the 1930s-1970s the capital Kabul was known as the Paris of Central Asia.

In the 1970s, Communist groups began making inroads into the country through the influence of the Soviet Union. In 1978 a Communist coup took over the government, but only had a fragile hold on power. To support the fledgling communist government, the USSR invaded, sparking a long and destructive war lasting until 1989. To counteract Soviet presence in the region, the US and other Western countries armed the anti-communist mujahedin rebels eventually leading to the withdrawal of Soviet forces. Upon their withdrawal, the country fell into civil war as different factions sought control over the country. In 1996, Kabul fell to the Taliban, which was supported by neighboring Pakistan.

After the September 11, 2001 terrorist attacks, US and Allied forces along with anti-Taliban forces in the northern part of the country toppled the Taliban. The UN followed this move by establishing a process for reconstruction and the adoption of a new constitution.

In December of 2004, Hamid Karzai became the first democratically elected president of Afghanistan. The legislative body was inaugurated the following year. Karzai was re-elected until his presidency ended in 2014. Ashraf Gani became the new president after a controversial election. In 2021, Afghanistan is back in the headlines. After a nearly 20-year insurgency, the Taliban has again taken power on the heels of the withdrawal of American troops.

History of the Afghan Afghani

The original Afghani was was introduced in 1925 shortly after Afghanistan created its first modern government. Prior to the Afghani, the country had used the Afghan rupee imposed by British colonialism in 1891.

The modern Afghani was reintroduced in 2002 in order to stabilize the currency and reduce inflation. Because of government and economic instability since the 1970s, these currency reforms in 2002 greatly stabilized the currency as well as reduced inflationary forces.

Much of the currency value prior to 2002 was controlled by tribal leaders and there was no universally accepted currency with an agreed upon value.

With the new currency, the central bank of Afghanistan introduced denominations of one, two, five, 10, 20, 50, 100, 500, and 1,000 AFN. In 2005, the one, two, and five AFN bank notes were replaced with coins. More recently in 2014, the 1000 banknote was updated with security features reducing any risk of counterfeiting. The Afghani now follows European standards with watermarks, tamper free strips, and holographic imagery in the currency. 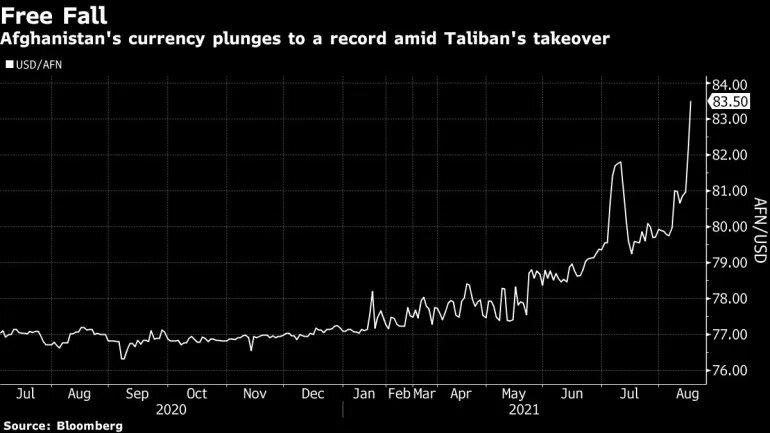 At US First Exchange, we deal in popular and exotic currencies, including Iraqi Dinar and Vietnamese Dong. You can order foreign currency online and have your money shipped straight to your door in 24-48 hours. All shipments are fully insured, and we pride ourselves on having the industry’s lowest spreads. Sign up for our exchange rate alerts to track the value of Iraqi Dinar over time and find the best time to buy currencies.