Top 12 Things to Do in Canada on Your Next Trip

Canadians are a lucky bunch for living in a country as vast, contrasting, and beautiful as Canada. From the almost magical places of nature to the rich historical and cultural heritage of many diverse nations - there are so many things to do in Canada, but not enough time to visit them all.

If you are an outdoor enthusiast and you like to stay somewhere with cooler air, if you like the snow and winter sports, and if you like to explore flora and fauna, you will love Canada. Beaches, mountains, and rainforests are all hidden in National parks across the Great White North. There is no doubt that it is hard to decide where to go.

We collected some of the best things to do in Canada on your next trip, and we found places from all over the country so you can visit at least one thing in whichever state you decide to visit.

If you are traveling to the second biggest country in the world you need to specify where you are going before you start packing and creating outfits in your head. There is a big difference between the north and south, as well as the east and west parts of Canada.

This can only tell you about the weather conditions and the untouchability of nature in this marvelous county. The northern part has very harsh and long winters, but the weather is somewhat moderate in the southern parts. Out of all things to do in Canada, looking at Aurora Borealis in the high north is probably the most amazing experience.

If you plan to visit Vancouver bring an umbrella and rainy booths, as the oceanic climate brings no snow and a lot of rain to the western part of the country. The southern land between the coasts of Canada has a humid continental climate, meaning that winters are cold, and the summers are warm with a lot of rainy days. The eastern part of the country, with cities like Toronto and Montreal, has the warmest weather.

Have you ever wondered what Canada is best known for? Maybe for the snow, moose, maple syrup, or the politeness of the Canadian people? Yes, but also for the untouched wilderness and baffling natural wonders.

48 national parks cover everything from forests, marine life, and the geological uniqueness of the area. From boreal forests to the Great Lakes, this vast land will leave you speechless.

More than 2,500 square miles of unspoiled wilderness laying in the Canadian Rockies is called Banff National Park. Turquoise Lake Louise, a Canadian hamlet, is located in the park and many hiking trails lead to it. The scenery of Banff National Park is an awe-inspiring setting, with both greenery of tall trees and the blueness of the lakes.

The Rocky Mountains are a home for many different animals, such as wolves, deers, and bears. It is illegal to touch, feed, or approach any wild animals while you are visiting the park, and there are many measures to protect both tourists and animals. You can book a tour and enjoy safe wildlife observation, and this is one of the most nature-connecting things, out of all the things to do in Canada.

Hopewell Rocks is an example of a natural masterpiece created with patience for thousands of years. The Bay of Fundy is located in the eastern part of Canada and it is special for two kilometers of coastline sculpted by one of the highest tides in the world.

Rocky sculptures are shaped like four-dimensional spades and present a major tourist attraction and a must-see thing to do in Canada. It is important to check the state of the tides beforehand, otherwise, the tide could be very high, to the point that you only see pointy rocks sticking out of the water.

Approximately 90% of the Niagara River flows over Horseshoe Falls, one of the three waterfalls that create Niagara Falls. This goes to say how epic the view of this place is. It is one of the biggest waterfalls in the world, it is a monumental landscape, and a romantic place where many wedding ceremonies take place. 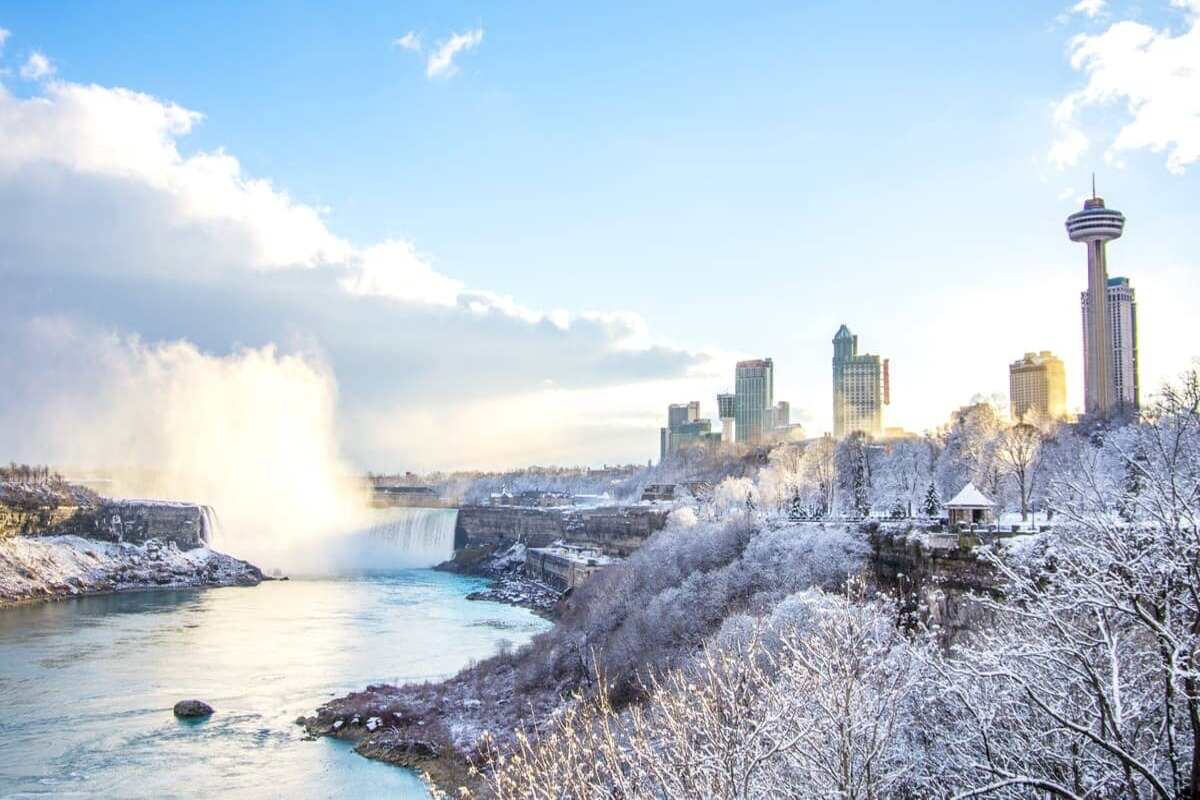 If you are lucky enough to catch a rainbow over Horseshoe Falls, you will fall in love with this natural wonder. Out of all things to do in Canada, this is probably the closest for Americans because it is on the border, near New York and Pennsylvania.

Wolf Lake is a great place to visit if you are in the Yukon state. For nature lovers who love peace and quiet, this place will feel like a temple of tranquility. The water is dark blue and still, and it is surrounded by the tundra forests.

This can be the most interesting thing to do in Canada for people who like fishing because you can sign up for a fishing trip and fish with local professionals. Remember, Wolf Lake is located above the 60th north parallel, so it can get freezing cold, with January temperatures getting lower than 20o F.

Every winter sports enthusiast’s haven is located just north of Vancouver and it is called Whistler Blackcomb ski resort. The town of Whistler was the place where the 2010 Winter Olympics were held, and visitors can enjoy the same venues in the biggest ski resort in Northern America.

One of the adrenaline-inducing things to do in Canada is to endure some of the snow activities of the Whistler Blackcomb. The resort offers ziplining, dog sledding, and helicopter ski touring, for the bravest visitors. There are also family-friendly tracks if you are visiting with kids.

The Atlantic Ocean and Nova Scotia keep a hidden gem of Canada called Sable Island. This very small and isolated island is home to the protected wild horses that wander all around the sand-covered land. Note that the island is protected by the federal government, and it is open for visitors from June to October.

Access is not possible during the winter months, and it is partly because the island has a history of shipwrecks that named the island “The Graveyard of the Atlantic”. Apart from the wild horses, there are many types of birds living on the island, as well as rich marine life.

Things to Do in Canada’s Historical and Cultural Places

Canada is one of the most multicultural countries with multiethnic cities such as Toronto where people speak more than 140 languages. There are around 2,500 museums, art galleries, and heritage institutions in Canada, that preserve the culture of all nations, pre and post-colonialism.

Othello Tunnels are a great way to explore Canadian history, as they were built more than a hundred years ago to connect Kootenay and British Columbia. This construction was very important for the Canadian economy. The railway that passes through the Othello Tunnels was built into the massive mountains that got in its way.

The trail is now open for hiking and trekking, but the railway itself is not in function. Visiting Othello Tunnels is probably one of the eeriest things to do in Canada, however, it is not always possible to enter, so check their website to see if Coquihalla Canyon Provincial Park allows visitors.

The Monkey's Paw is a unique place. It is a bookstore, but not just the regular kind. It is the home of Biblio-mat, one of a kind custom-made vending machine, that dispenses old books for $2, and a fun haven for book worms and antique collectors.

This bookstore is located in Toronto, and it is named after a famous short horror cautionary tale with the message “careful what you wish for”. The interior is eclectic and artistic, there are books that are hundreds of years old, and all of them are separated into four different sections: the arcane, the macabre, the beautiful, and the absurd.

If you want a comprehensive story about the country’s history of armed conflict, visiting the Canadian War Museum in Ottawa is probably one of the best things to do in Canada. The architecture of the building will draw you in, but the exhibition will make you stay for hours.

There is a gallery, library, and an archive inside the museum. More than three million artifacts in this museum are spaced out across more than 4,5 million square feet. If you are visiting Ottawa, go to the Canadian War Museum, and even if you don’t usually like history lessons, you will not regret it.

Notre Dame in Old Montreal is an almost 200 years old basilica that represents the religious heritage of Quebec. It is an example of Gothic Revival, with high pointy ceilings and blue and golden interior details.

The awe-inspiring view of the cathedral is available each day of the week to visitors, from 8 AM to 4 PM, except on Sundays when it opens for the public at 12:30 PM. Standing inside the basilica is one of the most beautiful things to do in Canada.

If you are a tourist in Canada, do what tourists do and visit the famous CN Tower in Toronto. This is the Empire Building of Canada and the center of this country’s telecommunications networks. Out of all things to do in Canada, this one could be the only truly wonderful, as the CN Tower is classified as one of the modern Seven Wonders of the World.

CN Tower was the tallest building in the world until Burj Khalifa was built, but it is still holding the record for the world’s tallest freestanding tower. Once you get to the top, you might feel like you are on top of the world, and you wouldn’t be wrong.

As Canada’s historical area, Old Quebec holds many old buildings in pristine condition, so it might be fun to visit and feel like you traveled back in time. This is the place where many Canadian artists come and showcase their work because they feel inspired by the surroundings.

Before you arrive at your destination remember that Canadians use their own currency, called the Canadian dollar. If you do not want to lose money on large exchange fees in local exchange offices, it is necessary to buy the Canadian dollar beforehand. Order from US First Exchange and have foreign currency delivered to your address.