British Currency: A Comprehensive Guide to the British Pound

Britain earned its place in history for all the music and culture it brought us. Big Ben, Oasis, the Rolling Stones, the Beatles, and David Beckham are just some of the things it's known for. Not to mention its royal family. No wonder they sport them on the British currency.

The British currency is one of the safest currencies in the world. Based on the latest Triennial Central Bank Survey, it’s the fourth most traded one in the whole world on a net-to-net basis.

In this guide to British currency, we’ll explain it in depth. Its basics, denominations, history, and modern developments. You will learn why British currency is still one of the strongest currencies out there. And last but not least, whether it’s better to carry cash or cards when traveling to the UK.

The official currency of the United Kingdom is called the pound Sterling. It’s written with the symbol — £. Some people call it simply “Sterling”. Buying British currency isn’t hard in the UK, but you can’t spend Euros or any other national currency without an exchange.

The British pound is the basic British currency. You can use it both in the United Kingdom and its Crown Dependencies. The pound is further divided into 100 pence. Pence is the plural of a penny. The international ISO currency code for pounds is GBP — Great Britain Pound. 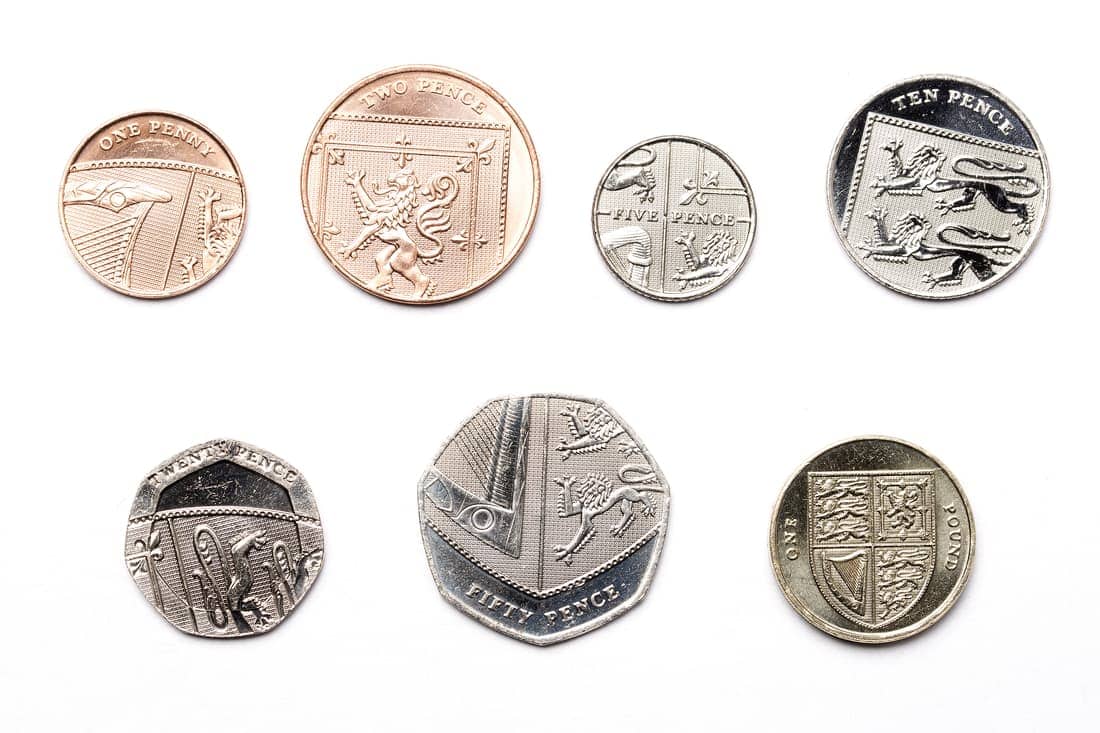 British currency banknotes of various denominations, but only re 4 issued by the Bank of England (BoE), while others are issued by institutions in Scotland, Northern Ireland, and the Crown dependencies:

British coins also have different denominations. The only thing you should watch out for is that £1 and £2 coins look almost the same. But the new £1 coin that began circulating in March of 2017 has twelve sides. Also, it has a completely new design on its back. Other British currency coins include:

While the UK uses £1 coins as its main currency, the older £1 note is still accepted on Guernsey, the Isle of Man, and the Islands of Jersey.

How Is UK Currency Written?

If you’re writing the amount of British currency in figures, place the pound symbol £ in front of the figure. For instance, ‘£400’ is — four hundred pounds. If your amount only includes pence, you’ll place the letter ‘p’ after the number. For instance, ‘thirty pence’ is written as ‘30p’. Penny is the singular of pence.

If you’re writing an amount that has both pence and pounds, you’ll write the pound symbol only. Also, separate the pence and pounds with a full stop. You don’t need to write the letter ‘p’ after the pence. For instance, ‘seven pounds sixty pence’ is written as — ‘£7.60'. If you’re saying the amount out loud, you don’t have to say the word ‘pence’. For instance, ‘£7.60' — ‘seven pounds sixty’.

What Is British Currency Called? - Explaining the Sterling

The official full name of British currency utilized in all formal correspondences is the pound sterling. Pounds sterling for plural. The British also use the name to differentiate the UK’s currency from others with the same name.

The term pound comes from the value of 1 pound Tower. It was a weight of high-quality silver people called sterling silver. In fact, sterling silver is a standard of quality for metals consisting of 7,5% copper, 92.5% silver, and other alloys.

As of late January 2022, 1 British pound is worth 1.36 US dollars. Although, as you may know, currency rates are volatile and change every day. So your best bet is to check a currency calculator for precise daily rates.

The History Of British Currency

The Bank of England issued the first pound note around the end of the 17th century. The bank itself was established not long before that. While the Bank of England wasn’t the first to start issuing notes, it was the first that did it regularly. The first notes were written by hand. Of course, over the centuries notes went through various changes. Coins appeared first during the rule of Henry VII, in 1489.

Even though in 2002 the Euro become the unified, shared currency for the majority of states of the EU, the UK didn’t follow them. Rather, they maintained GBP as the official British currency. The Royal Mint handles the minting of all British coins. It also issues the coins of other nations of the Commonwealth.

Why Is British Currency So Strong? 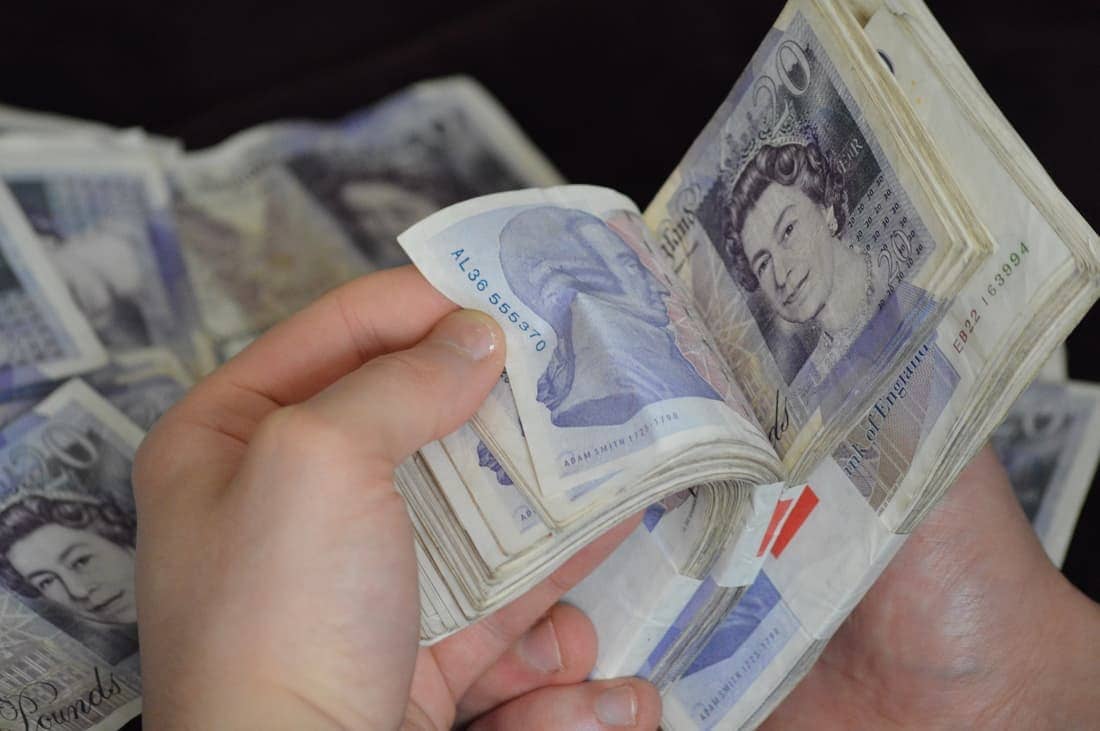 Moreover, the UK is one of the top exporters in the world for:

All of them are high-grade, highly-sought products, facilitating an incline for the British currency. Since the UK’s inflation rate is lower compared to other currencies, its buying power is thus stronger. This is why the pound’s exchange rate is powerful.

There’s also one more key factor that lends power to British currency. BoP, or Balance of Payment, is the nation’s record of transactions with the rest of the globe. Basically, it displays the flow of cash in and out of a nation, based on its import/export behavior. The majority of nations have a deficit of export. This means that the value of their imported goods/services is bigger than the value of their exported goods/services.

Should I Carry Cash When Traveling to the UK?

Good old cash is still accepted in the UK. Keep some British currency in your pockets to pay tips, cabs, and make little purchases. How much should you carry at all times? This will depend on how much you usually spend when going out. As well as how confident you are in carrying money in your wallet. The golden rule is that you carry as much in British currency as you would dollars if you were back at home.

But here’s the catch. It’s possible that you’ll meet some businesses, likely bars, and coffee shops, that don’t accept cash. Particularly in large cities like London. They refuse to take cash and only allow card payments. Although, this is quite rare. Fortunately, internationally accepted credit cards are still accepted all over the UK. If they don’t take cash, just offer them your card.

However, not all cards are accepted or recognized in the United Kingdom. You’ll likely experience difficulty trying to pass your Discover or Dinners Club card. This is also true for American Express cards. Luckily, the big two - MasterCard and VISA - are accepted all over the UK.

Where Can I Exchange British Currency?