In that context, the RBA analyses the trends of counterfeiting in Australia and issues reports on the findings. The most recent report of this nature, Recent Trends in Banknote Counterfeiting, has shown that counterfeiting of the AUS has been on a downward trajectory since the last report in 2019. Here, we will summarize the most important features of the report.

This rate is much lower than the 27 ppm from 2015, which was when counterfeiting was at its peak in Australia.

The RSB report attributes the decline in counterfeiting to two major factors:

The level of counterfeiting is inversely proportional to the lockdown measures that were imposed. To put it simply, the harsher the restrictions, the fewer counterfeits that were detected. The Australian Government imposed measures where members of a household were allowed to leave only for a specific set of reasons.

This allowed fewer opportunities for fake bills to be passed in stores. Unsurprisingly, retailers that were categorized as essential and allowed to operate more freely reported higher levels of counterfeits than retailers that were deemed non-essential.

However, as Australian states have been ending or easing lockdown measures since 2021, there are indicators that counterfeiting is again on the rise.

The NGB banknotes have more advanced security features than the previous series, making them harder to counterfeit. According to the RBA's report, the release of the NGB series correlates to the decline in counterfeiting.

A related factor is that the NBG series has become more common in circulation compared to the previous series. Thus, not only is the NGB harder to counterfeit, but the old series has become rarer, which leads to increased scrutiny of older banknotes, making it harder for counterfeiters to pass the banknotes.

Other Factors that Reduced Counterfeiting

The Most Counterfeited Banknote

In the previous decade, the 50 AUD was the most counterfeited banknote. Since 2020, the 100 AUD has taken that spot and continued to be so in 2021. According to the report, one counterfeiter that specializes in the 100 AUD banknote is major contributor to this shift. 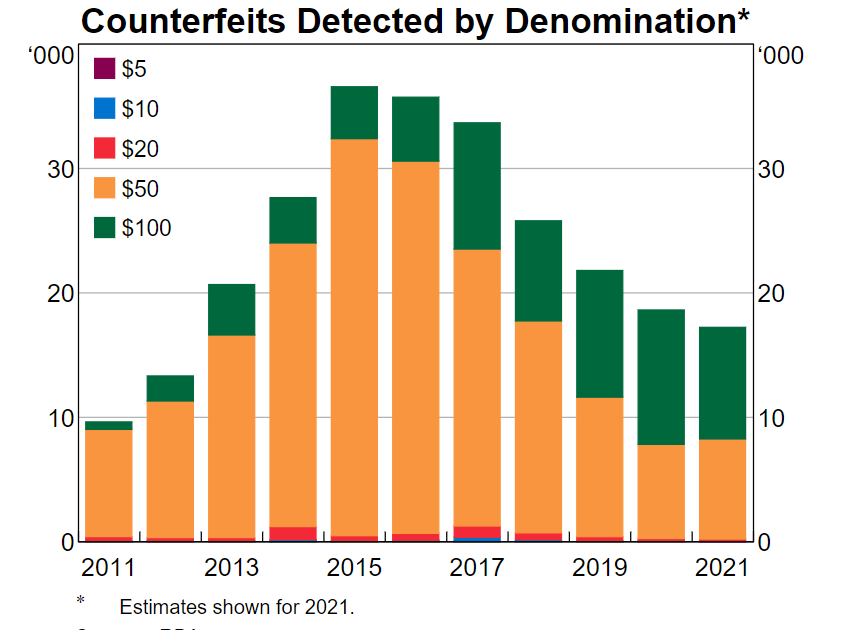 Getting Genuine Australian Banknotes in the US

While the situation with counterfeiting is improving per the report, you should still be careful when purchasing Australian dollars. If you are in the US and wish to buy AUD at premium rates, go to US First Exchange. You can pay by credit card and we will deliver high-grade, genuine banknotes right to your address.