Australian Currency: All You Should Know About the Australian Dollar

Australia – the land of the kangaroo, the koala, and 21 of the world’s 25 most venomous snakes. And the only country in the world that conducted a military operation (unsuccessfully) against its native bird population – namely, the Great Emu War. When you put it like that, it’s easy to forget that Australia has a strong economy and that the Australian currency is a major one.

In fact, the Australian dollar is the 5th most traded currency in the world on a net-to-net basis, according to the latest Triennial Central Bank Survey. And that is what this article will explore. You will learn about Australian currency coins and banknotes, its origin, exchange rates and monetary policies, with a few interesting facts added on top. But before we get to any of that, we should start with the basics.

The Royal Australian Mint is responsible for the coins of the Australian dollar. The coins currently in circulation are 5c, 10c, 20c, and 50c and $1 and $2; 1c and 2c coins were withdrawn from circulation in 1992.

Where Can You Find the Current Australian Dollar Exchange Rates?

Exchange rates can change daily; you can use this currency converter to check the daily rates of the Australian dollar against any other currency.

Currency in Australia Before the Dollar 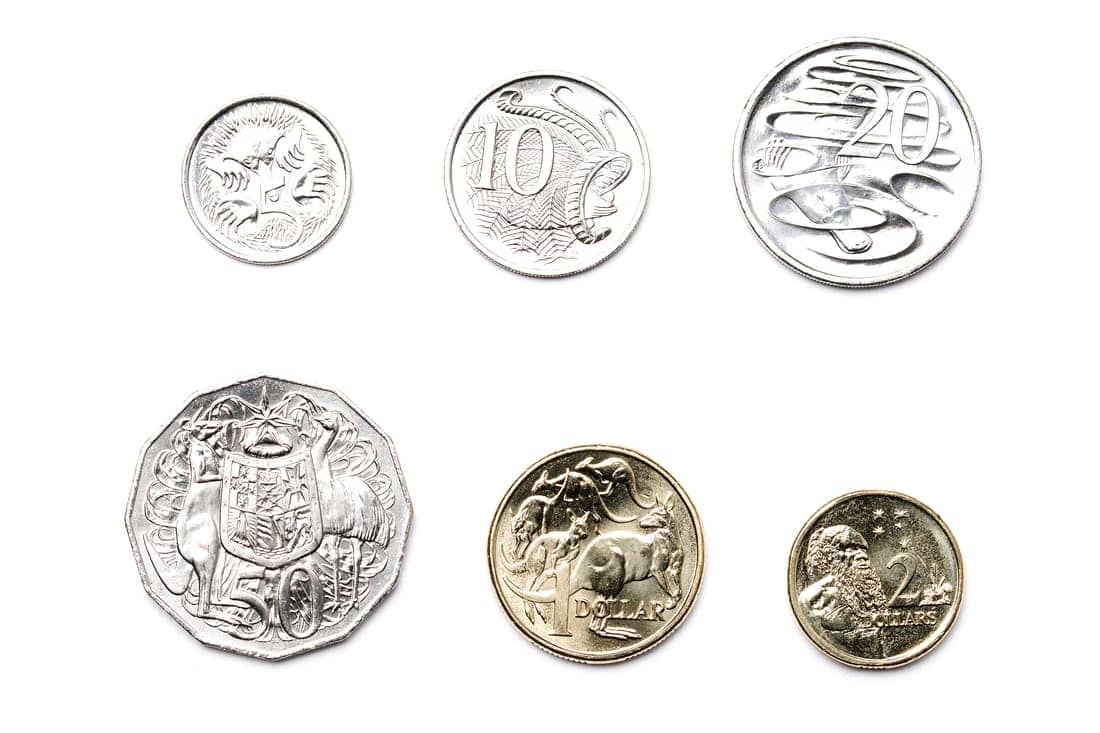 The Decimalization of Australian Currency

Attempts at decimalizing Australia’s currency go as far back as 1902, when a committee of the Australian House of Representatives proposed introducing a decimal currency that would have the florin as its base – 1 pound would be subdivided into 10 florins, and 1 florin into 100 cents. A similar idea was floated in 1937, when the Australian Banking Royal Commission recommended that the Australian pound should be subdivided into 1000 parts. The final move towards the decimalization of Australian currency happened in 1959, when the Decimal Currency Committee was appointed to examine the merits of decimalization by Australia’s Treasurer.

The Adoption of the Australian Dollar

The Committee’s report came the next year and was in favor of decimalization. It proposed that a new decimal currency should be introduced by 1963 and that it should be modeled on South Africa’s replacement of the pound with the rand.

The Federal Government supported the move towards decimalization, but postponed the proposed time frame for implementation. In 1963, it announced that a new decimal currency would be introduced in 1966. Consequently, the Australian dollar was introduced on February 14, 1966, at a rate of 2 Australian dollars = 1 Australian pound.

Switching to a Floating Exchange Rate

Interesting Facts About the Australian Dollar

Now that the economic side of Australia’s currency has been discussed, let’s switch gears and learn some interesting facts about the Australian dollar and how it can be used in Australia.

Restrictions on Paying in Coins?

While paying in coins is, naturally, legal in Australia, you are limited by the Currency Act of 1965 in how much you can pay by coin:

A Different Name for Australia’s Currency

The currency of Australia came close to not being named the dollar. The Australian Treasurer at the time, Harold Holt, announced in 1963 that the new Australian currency would be named the ‘royal’. This was met with harsh public disapproval, so the name was ultimately changed to the dollar.

Australia has a very unique ecosystem, and Australian coins reflect that – they are the only coins in the world that depict not one but two egg-laying mammals. The echidna is depicted on the reverse of the 5c coin and the platypus on the reverse of the 20c one. For good measure, their coins also depict marsupials – 5 kangaroos can be found on the AU$1 coin.

Where Can You Exchange Australian Dollars?

The Australian currency is rather popular and, consequently, not very hard to find. But finding good exchange rates combined with a simple process to exchange Australian dollars is another matter. The best and most convenient option is to go to US First Exchange and make your order online.

You can buy or sell Australian dollars at any time of day or night from your phone, computer, or any other device. Pay by credit card, bank draft, or money wire, and we will deliver high-grade banknotes right to your chosen address within 24 to 48 hours.