South African Currency: A Guide to the Rand

The South African rand is the legal tender of the Republic of South Africa, but it’s interesting to note that it’s also legal currency in Namibia, Eswatini, and Lesotho. The South African currency is, and has been for some time, of particular interest to investors, as it has seen many fluctuations during its short existence.

In this article, we will provide basic information about the rand, focus on some exchange rate trends, and give the current exchange rates. But, before we get to the current situation, it is important to understand how we got to where we are right now and explain the circumstances that cause the rand to fluctuate as it does.

The Recent Past of the South African Rand

The rand was introduced on February 14, 1961, as the official South African currency, replacing the South African pound. Interestingly, South Africa became a republic on May 31, 1961, so the rand predates the modern state of South Africa for about three months.

To get back to the topic at hand, when the rand was introduced, it was stronger than the dollar – 1 rand was worth 1.40 USD. And the rand’s value wasn’t simply a fluke, if anything in the forex market can be considered a fluke. The US dollar was worth more than the rand for the first time in 1982.

The Depreciation (and a Surge) of the Rand

So, South African currency was more valuable than US currency for over 20 years. However, erosion to the value of the rand was observable in the years prior. Many factors affect the value of a currency, but international sanctions as a form of opposition to the apartheid system and high inflation were the driving forces behind the depreciation of the rand.

By 1985, the rand was trading at a rate of 2 rand to 1 USD. The South African government even suspend foreign exchange for 3 days, attempting to stop the depreciation. Unfortunately, the depreciation trend continued. Dismantling the apartheid system also brought political instability, which led to a further depreciation of the rand.

But then, in 2012, a decline in the mining industry of South Africa caused another downward trend in the value of the rand. South Africa’s trade deficit and political events in the country further contributed to the depreciation when, finally, the economic slowdown in China caused the rand to reach its lowest point.

An All-Time Low for the Rand

The South African currency reached an all-time low in value in January of 2016 - 17.91 rand could be traded for 1 USD. It has rebounded since then, but it’s still far from the historic values it once had.

The rand is issued by the South African Reserve Bank. One rand is divided into 100 cents. The currency symbol for the rand is R and the currency code is ZAR. The name of the rand stems from Witwatersrand (translated to white water ridge) – the ridge upon which Johannesburg was founded. 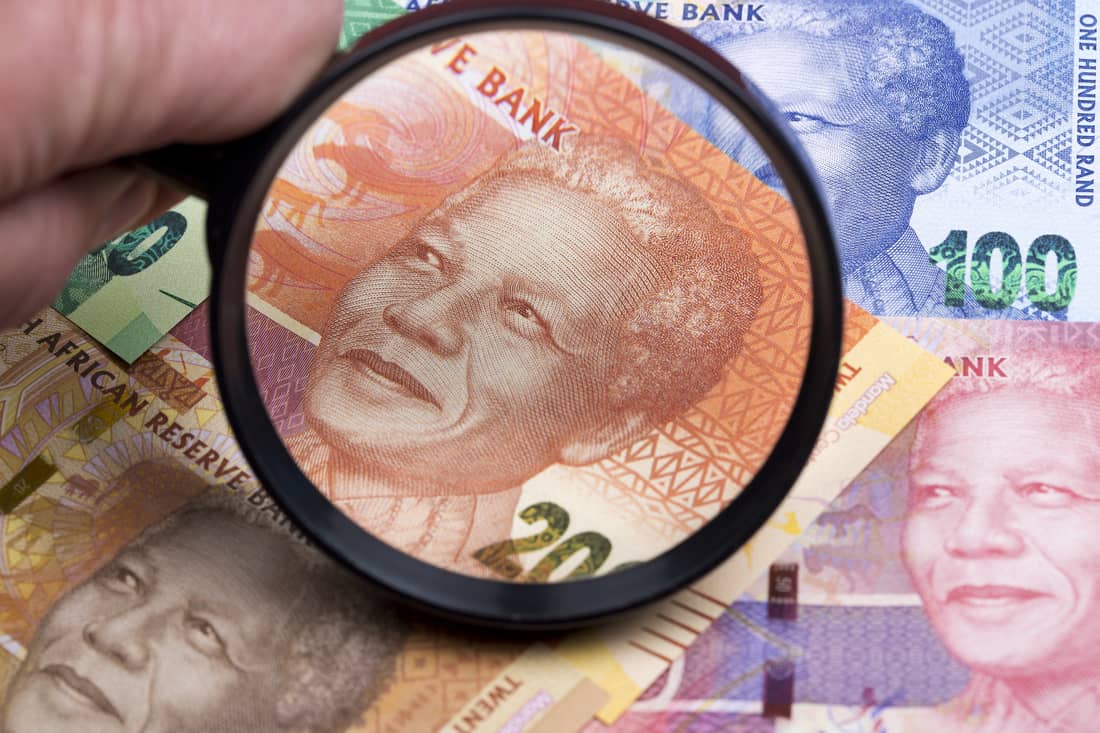 How Much Is a Rand to a Dollar?

Right now, ZAR to USD is ~ 14.97 : 1. However, as we’ve mentioned numerous times, the South African currency is volatile. The exchange rates tend to change and they change drastically. If you want to know the exchange rate of the rand to the dollar at any time, use this currency converter to find the current rates.

A Few Interesting Facts about the Rand

Even with its short history, the rand is quite an interesting currency. We’ll stress again that the rand was higher in value than the US dollar for over 20 years.

Then, you should be careful if you travel to South Africa and try to pay with 200 rand bills – there are a lot of counterfeits and certain establishments refuse to accept them.

Finally, the banknotes depicting Nelson Mandela are also called randela – a portmanteau of rand and Mandela.

Where Can You Exchange South African Currency?

Some banks in the US may let you order the rand, but the easiest way is to visit US First Exchange and order online. We carry all types of exotic currencies, including the rand. Regardless of whether you are going on a trip, buying to collect, or investing, we can supply you with what you need.

If you buy or sell rand, US First Exchange will deliver clean, crisp notes to your desired location. All of your packages will be fully insured and arrive within 24 – 48 hours. When you decide it’s the right time to exchange rand, you can order in 4 easy steps and pay by credit card, bank, draft, or money wire.