The Ninth Series of the Swiss Franc Is Carbon Neutral

The latest life cycle assessment for the ninth series was commissioned in 2021 and the results are out. In short, the ninth series has 19% less negative impact on the environment, measured by environmental impact points, in accordance with the ecological scarcity weighting method of the Swiss Federal Office for Environment.

The most important environmental impact points are the quantity of materials, type of materials, the amount and type of power needed to produce banknotes, and the lifespan of the banknotes.

Manufacturing of the banknotes themselves accounts for 82% of the overall environmental impact, while the disposal and the logistics side of the Swiss National Bank as it relates to handling banknotes combines for the other 18%. 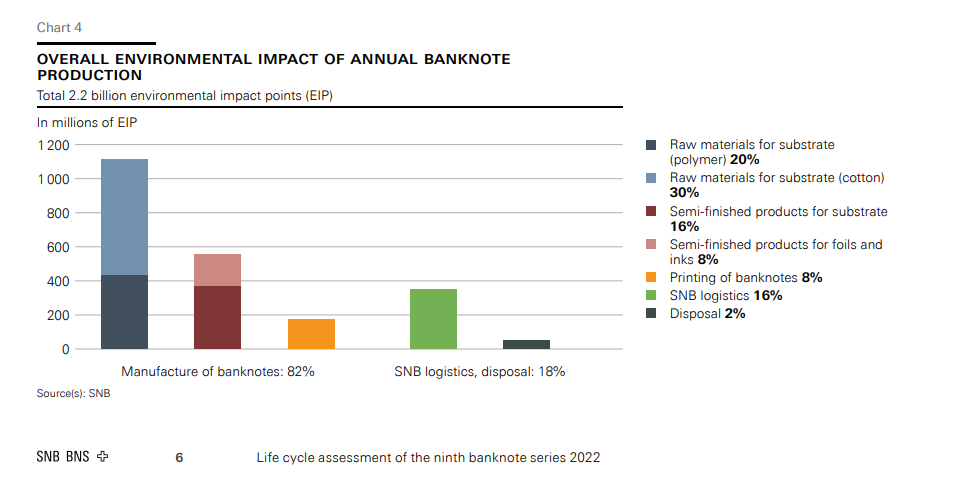 Production, distribution, and handling of the ninth series produces approximately 1,900 tonnes of CO2 equivalents, which are, according to the report, the “annual emissions of a Swiss village of 300 people.”

The difference between the eighth and ninth series starts with the types of materials used for production. The ninth series uses Durasafe, a substrate containing polymer. The eight series banknotes contain no polymer. This makes the ninth series more durable, on top of being more secure.

However, the use of polymer in the ninth series of banknotes means that the raw materials and production have a larger environmental impact than the eighth series. On the other hand, the companies that produce Durasafe utilize renewable resources to produce electricity, which partially offsets the bigger environmental impact.

The printing of the ninth series has a significantly lower environmental impact, once again, because of the switch to renewable resources for producing electricity. Similarly, the Swiss National Bank’s logistics processes regarding the ninth series also have a lower impact than those for the eighth.

Coupled with these factors is the durability of the banknotes. While polymer materials have a negative impact on the environment, the banknotes are more durable, so fewer need to be replaced each year. Additionally, cash is being less used in favor of electronic payments, which combines for approximately 30% fewer franc banknotes being printed annually.

In total, the ninth series of the Swiss franc is more environmentally friendly and sustainable than the previous series. On top of that, the Swiss National Bank strategically attempts to offset any unavoidable greenhouse gas emissions by being involved in various climate protection projects, making the ninth series effectively carbon neutral.