All the Fun Things to Do in Australia in 2022

Australia is a real tourist delicacy, as it offers a wide variety of different landscapes and climates, thousands of animal and plant species, and the culture created by dozens of coexisting ethnicities. The biggest island in the world has more than 20 thousand miles of coastline, a vast desert, and rugged mountains that stand high above the flatland in the east. With all of this landscape, it is easy to find things to do in Australia.

However, sometimes choosing what to do and visit can be a hard task for those who like to plan their trip ahead. So, we filtered out some of the best, fun things to do in Australia, and chose a few things in every part of the country. There are five states on Australia’s mainland, and we did our best to choose the most amusing things to do in each state.

How to Pack When Traveling to Australia

Depending on when and where you travel in Australia, you should be careful of what you pack. Generally, the northern parts of the country are hot all year round, while the southern get cold during wintertime. Unless you are traveling to the mountains, pack lightly - no need for bulky winter jackets and booths. But many areas of Australia tend to get cooler during the nighttime, so grab a long sleeve and long socks.

Tourists can find fun things to do in Australia, whether they like cooler or hotter temperatures. Keep in mind that Australia is the driest continent in the world, so the chances of rain are low, with just a bit more precipitation in the tropical parts. So, an umbrella would probably be an excessive accessory.

However, remember that the seasons are reversed, as Australia lies in the Southern Hemisphere, meaning that summer in Australia comes around December. Australian fall is from March to May, followed by the winter months of June, July, and August.

Things to Do in South Australia

South Australia is located, as the name suggests, in the southern part of the country. Most of the state is actually arid desert land. The biggest city in South Australia is Adelaide and it is famous for its art scene, as well as its vivid nightlife. So if you were wondering if there were fun things to do in Adelaide, Australia - you bet there are. If you decide to stay there, do not miss the chance to visit Kangaroo Island, just southwest of the city’s coast.

Kangaroo Island is a unique, remarkable place outside the South Australian mainland. It was heavily affected by the 2020 wildfires, but it has been renovated since, and it offers, yet again, a romantic run away from the hectic reality. This nature lover’s fever dream has a collection of wildlife native to Australian land. 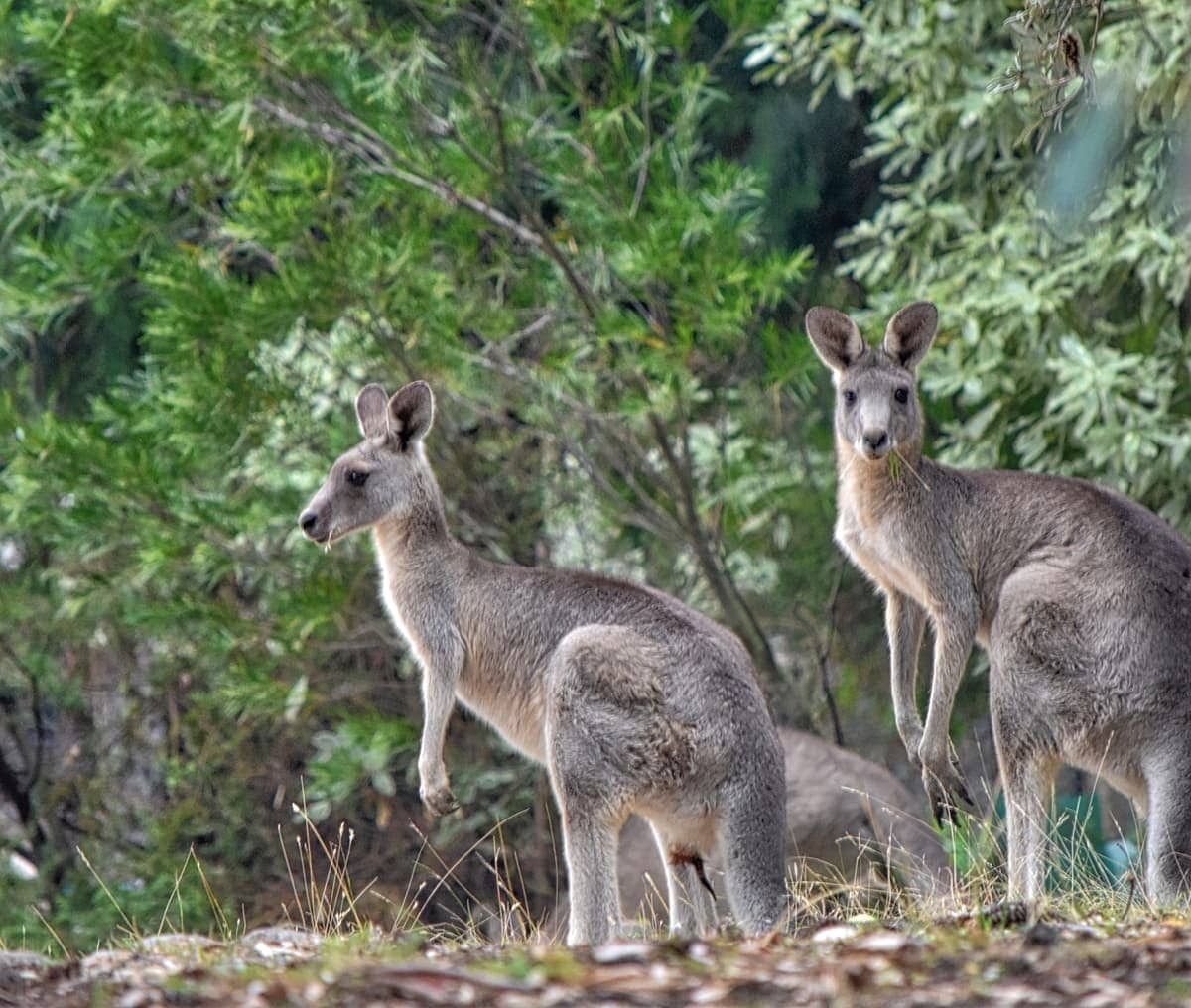 Out of all things to do in Australia, this may be the most one-with-nature experience in Australia. You can take a tour guide and enjoy some informal education, but you could also go on your own and walk among the sea lions as you are friendly neighbors.

Except for the kangaroos that gave the island its name, you can often see koalas, sea lions, spiny anteaters, and many more interesting animals walking around. You can stay in some of the luxurious accommodations on the island, or organize a camping trip in one of the conservation parks.

Things to Do Around New South Wales

New South Wales is probably the most visited part of Australia, and for good reason. The climate is somewhat similar to that on the coast of the Mediterranean Sea, with hot summers and mild winters. It is splashed by the waves of the Tasman and Coral sea, and the shore offers the best marine things to do in Australia.

New South Wales is where Sydney is located, the second-largest city in the whole of Oceania, as well as almost 800 national parks that cover desert, forest, and marine lands. The best thing to do in Australia when you travel for a limited time is to visit New South Wales, as the diversity of the scenery nicely reflects that of the whole country.

When talking about things to do in Sidney, we cannot skip over the famous Opera House and climbing Sydney Harbour Bridge. There are numerous music festivals, nightclubs, and other fun things for younger generations.

Beaches around Sydney are full of family-friendly activities, and for those who enjoy nature, we recommend hiking to the top of the Blue Mountains, which stand tall east of the city. One of the most unique things about this area is probably the Figure Eight Pools.

Figure Eight Pools are nature-made pools in the shape of the infinity sign, located on a remote shelf area, and it can be one of the most adventurous things to do in Australia. If you plan on visiting the Pools, make sure you check online or with the locals if the conditions are safe, because it can get risky when the waves get too high and strong. If you get to enjoy the afternoon in the Pools, it would be something else, we can promise that.

Things to do in Victoria

The state of the Goldrush has a lot to offer to its visitors. Ballarat is a town that attracts tourists precisely because of Sovereign Hill, an open-air museum dedicated to the history of this gold-booming town. An hour and a half drive away from the state capital Melbourne can take you back almost two hundred years back to the past.

For history lovers, there is another fun thing to do in Australia - that is a ride on the Puffing Billy. Puffing Billy Railway is a 120-year-old structure that will make you feel like you are in a historical novel. Riding in a steam train, in preserved carriages, you will pass through magical forest scenery and the view will leave you breathless. The ride is the most astonishing out of all things to do in Australia. The ride is just outside Melbourne, so you can make it a day trip out of it.

The first thing that comes to mind when searching for things to do in Melbourne probably isn’t going to be the nightlife. However, this city is so lively and fun, that many young people enjoy the nightlife scene that it offers.

For many travelers, it can be confusing and a little awkward to fit into the nightlife of a city, but Melbourne has got something for everyone. There are many hidden pubs, which are a great place to meet people.

Going to The Esplanade and Bar Americano can get you acquainted with the locals who will then make sure you have the best time in some of their nightclubs. There are nightclubs where you can listen to electronic music and they are open 24/7. Revolver and Brown Alley are just some of the places with a license to work all the time.

Some of the bougie-on-a-budget things to do in Australia is to go to bars where they serve eccentric drinks with liquid nitrogen, fire, and other spectacular additions. Such a place is Eau de Vie in Melbourne, such a fun and instagrammable bar, for all those who like to capture their travels.

Things to Do in Queensland

Out of all the sights and things to do in Australia, nothing can measure with scuba diving in the Coral Sea. The Great Barrier Reef is the largest coral reef in the entire explored world and is one of seven natural wonders. Scuba diving and snorkeling around this area will feel like a dream and marine life scenery will stay with you forever.

Daintree rainforest is located in Queensland’s tropical north and it is the oldest rainforest in the world. Walking around this place can leave you feeling otherworldly and the experience will be sacred. Not only are you walking on ancient ground, but once you get to Cape Tribulation the scenery will astound you. This is truly one of the most unparalleled things to do in Australia.

Things to Do in Western Australia

The biggest state of Australia offers probably the biggest cultural diversity out of all. There are many ancient Aboriginal sites that preserve the history of Australian native residents. The state offers many vineyards for wine tasting and relaxing, and there are beautiful beaches on the coast of the Indian Ocean.

As most of the state is covered with sand dunes, there are many things to do in Australia’s desert. Sandboarding is an incredibly fun experience for all visitors, and there is the best location for this activity just outside of Perth. Wear goggles or some kind of eye protection and boogie on!

Things to Do in the Northern Territory

The Northern Territory is most recognizable as the state of Aborigine history, the desert, and the national parks. The most famous attraction is Uluru, the iconic red-colored massive boulder - nature’s wonder beloved by the tourists.

The Islands of Smiles are formed by nine small islands, two of which are inhabited. All those islands hold Aborigine culture in their rainforest lands surrounded by white sandy beaches. You can take a boat tour from Darwin and make a day trip exploring the Tiwi Islands (the real name for Islands of Smiles).

Australia’s largest national park should be on top of the list of things to do in Australia for every serious traveler and nature-lover. Hike around Kakadu Park and explore the magnificent waterfalls that form after heavy rain and all the wilderness area in its glory.

You can take a cruise and explore the space using canals that circulate through the park, but that means of transport and exploration may not be available during the wet season when some parts of the park are flooded.

…dangerous animals. That is the stereotype that circles in the media, and it is partly true because there are hundreds of venomous species of animals in Australia. Blue-ringed octopus, box jellyfish, funnel-web spider, just to name a few. However, the fact is that the two animals that killed the most people are cows and horses. This means that if you don’t get too close to any of those poisonous animals, they are nothing to be worried about.

A Bit About Australia’s Currency

To avoid high fees at the airport exchange offices or during credit card charges, buy Australian dollars at US First Exchange. You can have the currency mailed to your home address or transferred electronically.

Do not worry, Australia is predominantly plastic card-friendly, so you don’t need a lot of cash with you. This is the best way to avoid losing money or getting pickpocketed.