Everything You Need to Know About Vietnamese Dong

The Vietnamese Dong is an exotic currency that has begun to receive interest from investors and collectors worldwide. As Vietnam has emerged from its chaotic past, the economy is growing once again, and travelers around the world are seeking it out as an affordable destination for adventure travel and relaxing retreats.

Want to learn more about the currency? Let’s explore the history of the nation and the currency. It has traveled a unique path and will help you understand why many want to hold this country’s money as a collectible or investment.

A Brief History of Vietnam

The first historical evidence of people in the Vietnam region was in 2879 BCE with the emergence of the Hong Bang Dynasty when the first Hung King united all the local tribes under one rule. This dynasty would rule the area for over 2500 years.

With the decline of the Hong Bang Dynasty, China begins encroaching on the kingdom of Vietnam. Until 544 CE, there was a perpetual struggle among the local Vietnamese peoples, tribes, and the Chinese rulers. Finally, the Vietnamese took control and the Ly dynasty began under emperor Ly Nam De. This dynasty remained until 602 when the Chinese took control again.

This back-and-forth struggle with many other groups including the Chinese, the Mongols, and other surrounding groups continued for centuries.

One high spot during the medieval period of the country is 1418. A wealthy philanthropist by the name of Le Loi sparked the Lam Son Uprising against the Chinese. The uprising was successful and Le Loi became emperor in 1428, establishing the Le dynasty.

Under Le’s leadership, one of his companions, scholar Nguyen Trai wrote the Great Proclamation. This document created an undercurrent and spirit of independence and nationalism that kept the Vietnamese people united in all future occupations.

Colonialism and the Modern Era

Le’s dynasty, like those before, was short-lived. Portuguese explorers discovered the area in the 1600s exposing this part of the world to all the European continent. Then, in 1858, France took control of Vietnam, making it a French colony. The French would remain in control up to World War II when the Japanese would step in after the French were defeated by the Germans.

It was during World War II, Vietnam saw the rise of Ho Chi Minh with the founding of the Communist Party of Vietnam. The rise of this personality would eventually lead to the breakup of Vietnam into north and south, along with US involvement in the Vietnam War.

The Vietnam War era created a lot of chaos for the nation, ultimately leading to a Communist takeover and unification of the country. The remainder of the 20th century leads to unification between the north and south. Eventually, the US ended economic embargoes and the Communist government softened, allowing economic prosperity to begin slowly.

Today, Vietnam is still under communist rule, but it is a softer hand and is similar to that of China. The population of Vietnam is around 96 million people. Market forces are allowed to move within the country, but the government keeps a strong hand.

To demonstrate their commitment to economic activity, a stock exchange was opened in 2000. The opening of Vietnam to the rest of the world has created an infusion of capital and resources that make the currency attractive and poised for growth.

History of the Vietnamese Dong 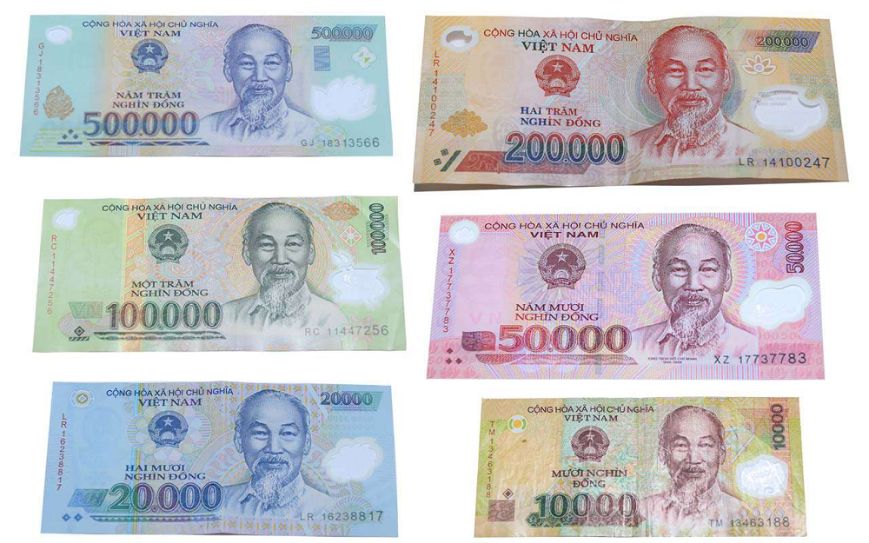 The currency code for Dong is VND, and the currency symbol is ₫. The name "Dong" is from the term "dong tien," meaning money. It is a loan word for the Chinese, referring to bronze coins the Chinese used during their control of the country.

The Vietnamese Dong was first introduced in 1946, replacing the piastre of French Indochina. There have been multiple variations of the Dong over the years but was fully unified into one system in 1978 after Vietnam was unified. In 1985, the Dong was revalued. 1 Dong now equaled 10 Dongs of the old currency. The revaluation created a cycle of inflation lasting through the mid-1990s.

Before 2003, there were no coins. Vietnamese had to exchange banknotes for tokens to purchase anything in vending machines. Coins are still not easily attainable which makes shopping in Vietnam an interesting experience.

To avoid giving change with coins, most merchants will round up or down the total purchase. Vietnamese and frequent travelers have gotten used to this practice and do not reject the custom. As the modern economy emerged, Vietnam struggled with currency counterfeiters. To combat this rising problem, the government has implemented some of the best currency security features in the world.

Today, Vietnamese Dong are no longer printed with cotton paper, but with a special polymer designed to deter counterfeiting. They are considered an exotic currency, just like the Iraqi Dinar or Indonesian Rupiah. Many of their bills include an anti-counterfeit widow embedded inside their polymer-based banknotes.

Note Printing Australia has provided Vietnamese money with holographic technology on their bills.

Vietnamese Dong banknotes belong to one of two “families” - the cotton family and the polymer family.

Banknotes in the cotton family are of low value and no longer produced, and you’ll rarely touch them as you can’t buy a lot with them. VND$200, VND$500, VND$1,000, VND$2,000, and VND$5,000 fall into this family, but they range in value from less than a penny to $0.22 in current USD values. Moreover, these banknotes are easily torn and damaged by water, which only adds to their already low value.

A 200 Dong banknote is bronze and you can’t buy anything with it alone. That’s why it’s rare to see it being used. The 500 Dong notes are red. However, even a small snack will cost you at least a purple 1,000 note. The brown 2,000 and blue 5,000 notes are more common but still have low value.

Often, locals collect these notes to gamble with them during the holidays like Tet, the Vietnamese New Year.

If you’re traveling to Vietnam, you’ll likely use the 50,000 note the most. Currently, in the foreign exchange market, it’s worth around USD 2,15, with which you can buy a full meal plus a drink and dessert.

Common Issues with the Vietnamese Dong

Be careful to not accidentally hand over too many notes when buying with Vietnamese Dong, as they can stick together. That’s especially true for polymer banknotes. You can keep the higher-value banknotes in a different compartment of your wallet to avoid these problems.

Moreover, street vendors often don’t have enough change for high-denomination notes, so make sure you always have lower denominations with you.

Where to Buy Vietnamese Dong

For investors, collectors, or travelers, the Vietnamese Dong is an interesting currency to purchase. Vietnam is an emerging economy, and as the region has stabilized has seen an influx of foreign investments. If you’re traveling to Vietnam, consider the convenience of ordering foreign currency online through a registered and insured exchange company.

At US First Exchange, we deal in popular and exotic currencies, including Iraqi Dinar and Vietnamese Dong. You can order foreign currency online and have your money shipped straight to your door in 24-48 hours. All shipments are fully insured, and we pride ourselves on having the industry’s lowest spreads.

To provide the most secure and safe transactions, US First Exchange is registered with the US Treasury as a Money Services Business (view a copy of our registration). In addition to federal regulation, we hold multiple state-specific licenses as a money services business. Where required, we are bonded as well.