The Entire History of German Currency

The history of the German currency has had its ups and downs over the centuries. From the days of the Roman Empire until today, Germany has always found itself at the center of economic change. In this article, we take a look at the historical development of the German currency from the very beginning to the present day.

If you are traveling to Germany, this article could help you explore this country’s rich and turbulent history. Before we dive into the ins and outs of German money throughout the centuries, it will be helpful to remember that the currency closely followed the political, social, and economic changes of the region.

For many centuries, gold has emerged as the primary unit of account and standard of deferred payment. As precious metals became scarce or too expensive to extract from nature, governments resorted to issuing coins, notes, and bank deposits. This was the situation all across the European continent - and so different coins became currency in different regions and cities.

The history of German currency starts from the early Middle Ages when coins became part of the monetary system and replaced bartering. By the 1500s, a single coin was created, the Thaler, named after the town in the Check Republic, where it was first minted. It was the first big silver coin in this region.

During the Holy Roman Empire, there were variations of metal coins used throughout the country, but each city and province had its own currency. Soon enough, other European countries slowly unified, and Germany followed.

First, the common currency for almost all German states was introduced - the Vereinsthaler coin. A few years later, German Empire unified all tribes, provinces, and cities under one roof and one currency - the German gold mark. The primary value of that country was cultural and economic sovereignty.

History of the Deutsche mark

The seventeenth century in Northern Germany brought the Hamburg mark, which had equal worth as a standard thaler coin. The word mark stems from the Latin marcha, which was a measure of weight for gold and silver.

For centuries to come, the mark was used in different denotations and shapes in various German and post-Habsburg regions. It wasn’t until the unification of Germany in 1873 under the reign of Otto von Bismarck that the mark reappeared as an official German currency for everyone in the country.

After that, the mark stayed and adjusted to the economic and social conditions until it was discontinued and swapped with a euro in 2002. Mark has always kept the same symbol - ℳ and has been divided into 100 pfennigs / ₰.

Goldmark was an official currency of the German Empire from 1817 to the beginning of World War I. German marks of that time had coinage and banknote denominations. Smaller value coins of pfennigs and 1 mark were issued for the whole country, while states issued their own higher denominations.

Banknotes were not as used during the beginning of the Empire but became more and more popular. They were issued by the Reichsbank, equivalent to today’s Federal bank. German currency was one of the strongest in the pre-war world. 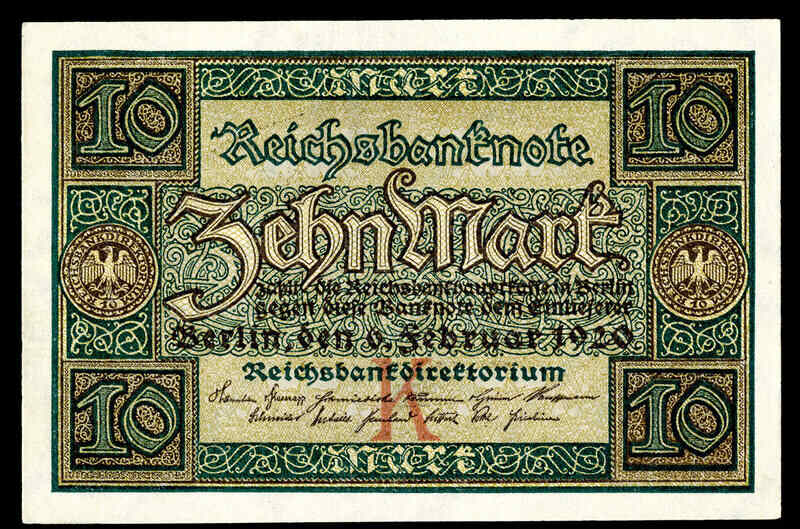 The gold mark was connected to the value of gold, but that system was abandoned when World War I began. Goldmark’s steep fall brought a new version of the mark - the German Papriermar, or paper mark.

The papiermark marked a dark period of German history - from 1914 and the beginning of WWI until 1922 and the hyperinflation that ruined the country.

In an attempt to control the hyperinflation that was going on after the war, Weimar Germany issued the rentenmark. Previously used paper marks became worthless. It was not long until it was replaced, but it was an innovative way to save the economy. 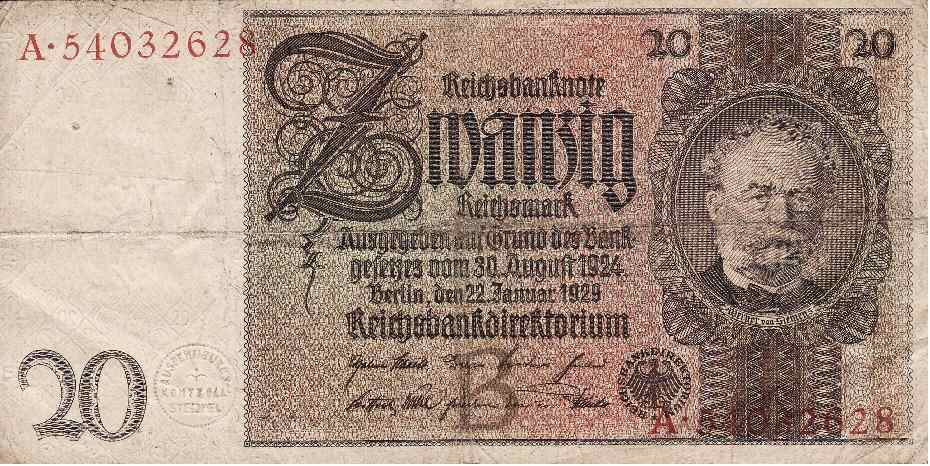 As rentenmark was only a temporary solution, there needed to be a more permanent solution for the economic instability. Reichmarks were used during the Nazi regime and the Second World War.

In 1938, the new reichsmark coins were issued with the new design, which included the Nazi swastika. During the war, reichsmark had its own versions in the occupied territories. This caused many of those countries to use their version of marks post-war.

Post-war Germany was divided into two parts: the Federal Republic of Germany and East Germany. German currency was also divided into two types of marks. Deutche mark was the official currency of the west, and it replaced the East Germany mark once the country united after the crash of the Berlin wall.

Euro was introduced to the German public in 1999, but the mark stayed until 2002. Germany is the largest national economy on the continent and one of the largest in the world. It is the biggest capital exporter in the world. Euro was received with ease, but some people still own marks, even though they have no value in everyday life.

When it comes to the design of the euro in Germany - there are two sides. The euro has the standardized side with the denotation number and the “national” side. Germany’s national sides are embellished with the emblem of the federal eagle, the words “unity, justice, and freedom,” Brandenburg Gate, and an oak twig.

Credit cards are widely accepted in German stores, but paying with one isn't quite as common in the rural parts of the country. However, more and more people don't carry cash because they find it inconvenient. Additionally, Germans still prefer plastic over electronic payment methods.

Most places accept card payments, but you can sometimes run into problems if you want to withdraw money from an ATM. There are fewer ATMs per capita in Germany than in the United States.

Exchange offices are usually located next to banks and post offices. They provide competitive exchange rates, although you might find better deals online. You can use your credit card to pay for transactions, but it’s best to avoid cash.

When it comes to counterfeit money, you’ll have no problem there. Germany has strict laws and high-tech protection against counterfeit. However, it is always better to check large bills - better safe than sorry.

Before you start packing, we recommend you plan your finances. Germany isn’t cheap, so planning can save you some bank. You can bring your currency and find a local exchange office once you arrive - but they charge large fees.

The best solution is to contact US First Exchange and buy euros online. We will deliver the money to your doorstep, so you don’t have to think about the number of ATMs around you.